The Japanese pavement ant, T. tsushimae is one of the most commonly encountered ants in southern and central Japan. There are also introduced populations of this species found in a number of US states.

Key to US Tetramorium species 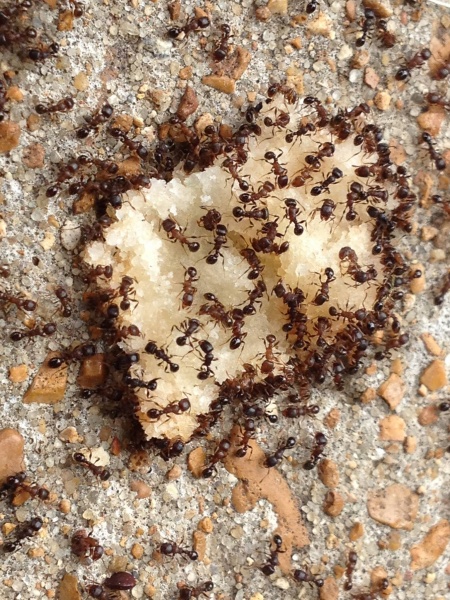 This image is Tetramorium tsushimae, Japanese pavement ant, feeding on mooshy cracker fragment, in a play area, in a suburb of St. Louis, Missouri. Light colored individuals among the dark ones are typical of this species, which is a bit smaller than Tetramorium immigrans, (2.5-2.8 mm vs. 2.9-3.2 mm). Colonies are polygyne, polycalic. The species is native to Japan, the Korean Peninsula, and temperate China. USA population originated in Tokyo area, so says its DNA (James Trager).

Sanada-Morimura et al. (2006): Polygynous colonies of T. tsushimae are very common in central Japan where it builds subterranean nests in open grassland. Large colonies may consist of several hundred queens and millions of workers, with multiple nests that are probably connected underground with each other (Sanada-Morimura, pers. obs.). Their main food resources are seeds of grass plants and root aphids (Abe, 1971; Yamaguchi, pers. comm.). This study examined reproductive success and territoriality in a study population in a Mitaka, Japan chestnut field. Neighboring colonies were observed having large battles with many workers massed in a small area. These battles lasted for hours and would end with a general retreat by both colonies. Few dead workers were found once the battle ceased. In 9 out of 15 cases territory boundaries shifted as a result of the battle. Reproductive output was correlated with colony size, with the average territory size 32m2. Reproductive pupae growth-rate was strongly correlated with temperature, in lab assays being highest at temperature between 30 and 35°C. In field colonies, under artificial boards as nesting cover, reproductive brood was preferentially kept in areas with the highest field temperatures, from 27.5 to 30.0°C. It was also observed that larger colonies, with larger territories, had more aggregated nest entrances than those with small territories and a more evenly distributed set of nest entrances.

Sakata et al. (2017) examined how this ant uses cuticular hydrocarbons (CHCs) in recognizing aphid mutualists. Workers of the ants were obtained from a colony found on the campus of Chiba University in Matsudo, Japan. This colony had ~1,000 workers and 3 queens. Tetramorium tsushimae tends the aphid species Aphis craccivora in Japan, and it has been shown there is a correlation in decreasing aggressiveness of the ants towards the aphids with increasing familiarity, i.e., via interactions when collecting honeydew (Hayashi et al. 2015). Another aphid species, Acyrthosiphon pisum, that are also in the ant's environment are never tended. Using a combination of extracted aphid CHCs and synthetic standards, worker reactions towards whole aphid CHCs, methylalkane fractions, and n-alkanes were tested. The ants were less aggressive toward the CHC profile of A. craccivora and methylalkane fractions from this aphid. The ants reacted negatively toward CHC profiles from A. pisum and n-alkane. This suggests T. tsushimae is learning and recognizing aphid mutualists using CHCs and, in particular, methylalkanes.

Watanabe et al. (2019) conducted an observational study of the aphid species Macrosiphoniella yomogicola (Matsumura) and the ants that tended their colonies. This aphid has been found to be an obligate ant mutualist. Nine aphid colonies were monitored in Sapporo, Japan over a multi-week period in August and September. Lasius japonicus, Tetramorium tsushimae and Pheidole fervida were found attending the aphids, with each ant species exclusively tending the aphid colony where each was observed. The only aphid colonies to survive through the monitoring period were those tended by Lasius japonicus. This suggests, but the he number of observed colonies was not sufficient to conclude, that T. tsushimae is not a mutualist of the aphid and is only opportunistically tending the colonies where it was found.

Hosoishi et al. (2019) examined winter foraging activity in western Japan. They found foraging activity was generally low, except during relatively warm periods when the surface ground temperature was above 6–7°C or soil temperature was above 4–5°C. Tetramorium tsushimae, Messor aciculatus and Pheidole nodus were the most abundant in the open land type, whereas Nylanderia flavipes, Pheidole nodus and Crematogaster osakensis were the most abundant in the forest type.