A neotropical plant genus. One common name of these plants is "Ant tree". These dioecious species of trees are most often associated with Pseudomyrmex but other species also inhabit their hollow stems.

The following is based on the Sanchez, 2015.

Triplaris Loefl. (Eriogonoideae, Polygonaceae) is a genus that includes 18 dioecious species of trees with a Neotropical distribution from southern Mexico to southern Brazil. All species occur in lowland habitats from sea level to 2000 m in altitude and are considered important components in all stages of secondary succession. A conspicuous feature of all species in Triplaris is the hollow stems that harbor ants (Fig 1). Although the plants produce no food bodies or extra-floral nectaries, 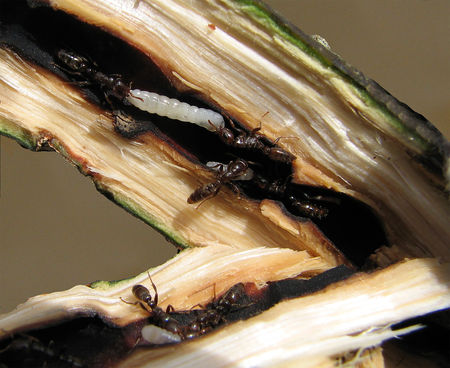 Sanchez 2015. Figure 1. Mutualism between Triplaris and Pseudomyrmex. Ants of P. triplaridis establish their colonies in the hollow stems of T. americana. 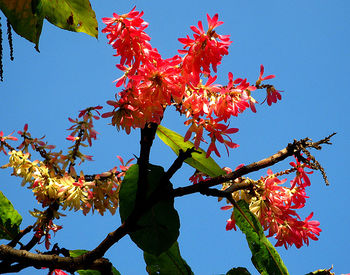 Ants that have a more extensive distribution associate with more than five species of Triplaris: P. triplaridis and P. triplarinus are associated with multiple host plants growing in sympatry. However, based on 37 collections of P. dendroicus from five different countries, there was faithfulness to a single host. These ants have only been collected in plants of T. americana. Species occur in sympatry (i.e. Triplaris dugandii, T. longifolia, T. peruviana, T. weigeltiana). Triplaris americana has a more ample range of distribution than P. dendroicus, but both organisms overlap in several regions of their range in Ecuador, Colombia, Peru, northern Bolivia, and western Venezuela and Brazil.

Triplaris and Pseudomyrmex triplarinus subgroup overlap in most of their range of distribution. However, Triplaris has a larger range of distribution and occurs in areas where its obligate symbionts do not. Ants are, in general, sensitive to habitat and climatic changes, which may restrict their distribution to avoid drier (western South America, northeastern Brazil) and colder areas (the Andes Cordillera). When the ranges of both organisms are overlapped, there is a hotspot for the association in the western part of the Amazon Basin. In this area, six of the seven species of Pseudomyrmex triplarinus subgroup and 12 of the 18 described species of Triplaris occur.

From the ant perspective, most species are highly promiscuous. Species of ants such as Pseudomyrmex mordax and Pseudomyrmex triplarinus do not seem to discriminate between host species, since P. mordax colonizes the three species of Triplaris that overlap its distribution and P. triplarinus can colonize at least five host species growing in sympatry. Pseudomyrmex triplaridis may show some specificity towards T. weigeltiana but it still colonizes four other hosts. However, even when most ant species are promiscuous, one species seems faithful to its host. The 37 collection records for Pseudomyrmex dendroicus show the same pattern: they were all collected in a T. americana host. Despite the fact that more plant species are sympatric with T. americana, P. dendroicus has not been collected in any other host. Although this pattern could change as more collections of hosts and their resident ants are available, there is still a high degree of specificity by P. dendroicus. These two organisms co-occur in most of their range of distribution, which could have led to ecological sorting. Two less well-known ant species from the P. triplarinus subgroup, Pseudomyrmex ultrix and Pseudomyrmex vitabilis, were not collected in this study. Pseudomyrmex vitabilis has not yet been collected from a plant host (the description is based on a queen) and P. ultrix is only known from a single locality in Ecuador, on T. dugandii. More collections are therefore necessary to clarify the degree of specificity of these two ant species to their hosts.