A monotypic genus, Tropidomyrmex elianae has been collected from a termite colony and from winkler litter samples.

Silva et al. (2009) - Tropidomyrmex can be easily distinguished from all other ant genera by the bilobed subpostpetiolar process, hence the generic name we chose for this ant. Bolton (2003) diagnosed the solenopsidine tribe group, which includes Solenopsidini, Stenammini and Adelomyrmecini (Bolton et al., 2006), as having, primarily, the clypeus constricted posteriorly, with median portion narrowed and elevated, without an isolated longitudinal carina, and the ventral surface of the metathorax simple. From the combination of characters that define Solenopsidini according to Bolton (2003), Tropidomyrmex does not have the short subtriangular mandibles, the dental count is different from 2-6, the clypeus is not bicarinate, and the maximum exposure of toruli is posterior to the maximum width of frontal lobes, characters that may vary in some genera. Still, according to Bolton (op. cit), most solenopsidine genera have a single stout median clypeal seta. Interestingly, although adult females of Tropidomyrmex do not have a stout median clypeal seta, the larvae of T. elianae clearly present a median seta accompanied by two similar ones at the anterior clypeal margin. The male has a row of setae at the anterior clypeal margin, although the median seta is not particularly different or stouter than the others in the row. Solenopsidines in general have a strongly differentiated antennal club of 2-4 segments. The funicular segments of Tropidomyrmex increase quite regularly in size until the obviously enlarged apex, different from all other solenopsidine or even stennamine ants; even the socially parasitic species , which tend to have very reduced dentition, retain a strong antennal club.

The mandibles of Tropidomyrmex are completely different from all other solenopsidine genera, with only a single curved apical tooth. Most of these differences may be related to the evident reductions that characterize Tropidomyrmex . The most striking character, however, is the presence in T. elianae workers of a clearly visible promesonotal suture, which is completely lacking in ergatoids.

Bolton (2003) recognized three genus groups within the Solenopsidini; Tropidomyrmex fits better within the Carebara genus-group. Judging from Ettershank's scheme (1966), Tropidomyrmex would be classified in his Megalomyrmex genus group within Solenopsidini , based on the antennal count, clypeus shape, and relative position of the anterior tentorial pits. Tropidomyrmex shares some characteristics with the solenopsidine Tranopelta Mayr and the recently described Dolopomyrmex Cover & Deyrup (2007): delicate and unpigmented female integument; strongly convex, non-carinate clypeus; antennal count; comparatively reduced wing venation; a broad attachment of postpetiole to gaster; specialized larval morphology (not known for Dolopomyrmex ), and the apparent cryptobiotic habits. However, Tropidomyrmex workers differ from these genera in having a single apical tooth on the mandibles instead of four to five, a palpal formula of 2,1 instead of 3,2 or 4,3, and an antennal club with a single segment instead of three.

The venom apparatus of Tropidomyrmex elianae is extremely delicate, and it was very hard to dissect without losing the connections among plates. This is why in Figure 5, some parts do not have their ends depicted. Comparing the venom apparatus of T. elianae with other Myrmicinae studied by Kugler (1978), it seems closer to Solenopsis and related genera, by the square spiracular plate, the one-segmented gonostylus and the overall shape of the oblong, triangular and quadrate plates. However, Kugler's classification of genera is very different from Bolton's scheme (2003), which hinders these comparisons.

Overall, most of the distinctive characters of this new genus appear to represent reductions in characters normally present in females of solenopsidine genera: fewer ommatidia, reduced mandibular dentition, reduced body size and shape, the fragility of the integument, fused and reduced structures of the venom apparatus, and reduced male wing venation. This may be related to the special habits adopted by these ants. It is noteworthy that T. elianae has been collected inside a chamber within a ground termite nest, but it is known also from two free-living workers extracted from the leaf-litter of two very close sites in central Brazil. From the very scanty information we have, it is not possible to ascertain whether the type series represents a whole colony or a fragment, and also it is not possible to be sure whether these ants always live inside termite nests. 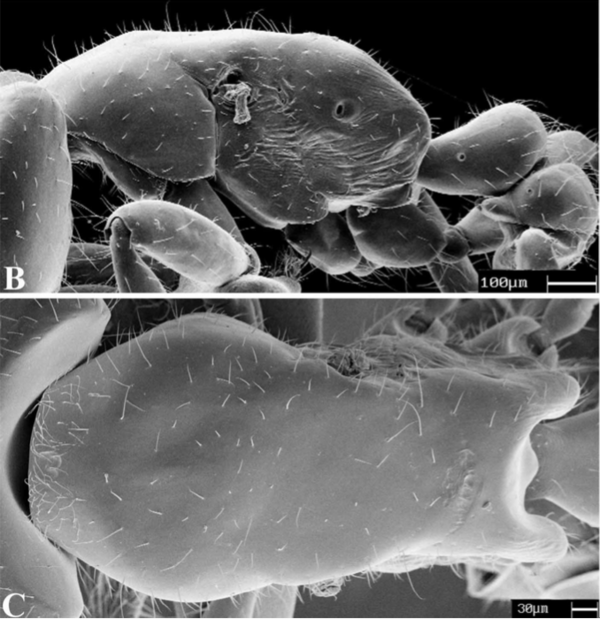 Ergatoid. Virtually identical to the conspecific worker except for the presence of the ocelli and wing buds, and the absence of a promesonotal suture.

Profile pheidoloid, although the head does not protrude ventrally as much as in Pheidole larvae. Head subcircular; irregular, very reduced mandibles, apices do not meet, edentate; prothorax and abdomen relatively short, no protuberances. Body pilosity sparse and formed by smooth unbranched and short anchortipped hairs.

The generic epithet refers to the keels under the female postpetiole; from Greek tropidos (τροπιδοσ) = keel, which, by virtue of being double, clearly differentiate these ants from all others, as far as we know.