The lone representative of the genus Vicinopone. Bolton and Fisher (2012) - V. conciliatrix appears to be a quite widely distributed but rare species. Its rarity is more likely apparent than real because it nests and forages in trees, rarely if ever coming down to the ground. Its type-locality at Tafo, in Ghana, was within the grounds of the Cocoa Research Institute of Ghana, where a nest of the species was discovered in a thin twig of a small cocoa tree, about 2 metres above the ground, in moderate shade. The nest contained 103 workers, 2 dealate queens and a number of brood. A second, smaller nest was also found at Tafo the following year, located just a few metres from the first, but the species does not appear to have been found there again. Brown (1975) recorded two paratypes from the Democratic Republic of Congo and Yanoviak et al. (2007) retrieved conciliatrix from forest canopy in Gabon. Recently, Peter Hawkes (AFRC) has sent us excellent photographs of a hand-collected specimen found in primary forest in Tanzania (Lindi Region, Ndimba Forest Reserve, 2008 (Hawkes, Mlacha & Ninja)).

This is the only species in the genus Vicinopone.

Brown (1975) - shows a mixture of characters of Lioponera, Simopone and Cerapachys, thus tying these genera together. In general habitus (elongate head and petiole, large eyes), conciliatrix is a Simopone. The frontal carinae are fairly close together, but parallel and separate caudad; they are intermediate between the condition seen in Simopone on one hand and Lioponera-Cerapachys on the other. The lack of ocelli in the worker and the 12-merous antennae are shared by conciliatrix with the majority of (but by no means all) Cerapachys-Lioponera. Toothed tarsal claws are a character of Simopone, but one also found in a few Cerapachys, including the type species of that genus. The petiole, with its weak lateral margins and barrellike shape, combines traits of Simopone, Lioponera, and Cerapachys s.str.

Bolton and Fisher (2012) - In major details of morphology, striking contrasts between Vicinopone and all species of Simopone include the following (the state considered apomorphic is italicised).

4 Ocelli are absent in Vicinopone, as opposed to present in Simopone.

6 A differentiated posterior (occipital) surface to the head occurs in Vicinopone, as opposed to the lack of such a surface in Simopone.

8 Metabasitarsus lacks a ventral glandular groove in Vicinopone, as opposed to the universal presence of such a groove in Simopone.

The workers are said to be size-variable, suggesting a polymorphic worker caste. Also: Bolton and Fisher (2012) - there is allometric variation in the size of the eyes, which become relatively larger with increased size. In the smallest workers measured (HW 0.32) the ratio EL/HW is 0.31. As HW increases the ratio increases, until in the largest workers (HW 0.42), EL/HW is 0.45. In full-face view the outer margins of the eyes of the smallest workers just graze the outline of the side of the head, whereas in larger workers the anterior halves of the outer margins of the eyes clearly interrupt the outlines of the sides.

Pilosity sparse, short, fine, decumbent to suberect on head, mandibles, trunk, and legs, except for an erect hair on each humerus; more abundant and longer, decumbent to suberect hairs on nodes and gaster, especially gastric apex. Scapes and legs with a modest vestiture of short, fine, appressed to decumbent hairs; funiculi with many short, suberect to erect hairs except on apical segment, which has dense, fine micropubescence. Eyes with few extremely small hairs.

Head in full face view strongly elongate, with parallel but distinctly convex sides, subrectangular posterior angles and a finely marginate, feebly concave posterior border. Eyes large, broad-elliptical, weakly convex, situated anteriorly, only about half their length distant from mandibular insertions, with about 35-50 rather coarse facets, touching the lateral margins of the head in full-face (dorsal) view. Frontal carinae parallel, not far apart, but with a distinct space between, extending posteriorly as slightly divergent fine ridges that end near the level of the middle of the eyes, but do not extend far from the midline toward the eyes. Edges of frontal carinae raised, but not vertical, slightly broadened just behind their midlength, but not covering antennal sockets; at their anterior ends, the carinae curve laterad to form ridges around the anterior edges of the antennal sockets. Broad median lobe of clypeus with a gently convex free margin. No trace of antennal scrobes. Mandibles triangular, downcurved, with basal and masticatory margins meeting each other at an abrupt curve; masticatory margin nearly edentate, with only very low, fine crenulation or denticulation in unworn samples; stiff, fine setae on inner (ventral) side of masticatory border.

Antennae 12-merous; funiculus apically incrassate; funicular segments II through IX broader than long, I and X slightly longer than broad, apical segment more than twice as long as subapical, and very slightly wider than subapical; 4 apical segments (or 5 in some views) forming a very indistinct club, this a bit lighter in color than rest of funiculus.

Antennal scapes gradually incrassate apicad, but not as thick as in some other Simopone species; when held back, extending a little beyond the posterior border of the eye. No trace of ocelli. The fine posterior margin extends around the posterior edge of the sides of the head and meets its opposite number at the midventral groove of the head, thus encircling the true occiput. Labrum with an emarginate free border. Palpi short, segmented 3, 2.

Trunk almost 3 times as long as wide, only very feebly constricted in the middle, with fine but distinct anterior pronotal margin; faint punctate sutural lines bounding the mesonotum in front and behind. Declivity of propodeum set off from dorsum and sides by a distinct, raised semicircular margin. As seen from the side, dorsal outline of trunk nearly straight from mid-pronotum to declivity; only a very feeble impression centered on metanotal groove, and propodeal dorsum very slightly convex.

Petiole barrel- or loaf-shaped, convex in both directions, as seen from above, with convex sides and widest near the posterior third; narrowed again slightly at posterior corners, which are rounded; anterodorsal border transversely marginate; seen in side view, a fine margin commences at the anterodorsal corner and runs back obliquely along the side to or near the posterior border below mid-height; this apparently represents the "Phyracaces margin" of each side of the node. Subpetiolar process low, with a pointed anterior convexity bilaterally bearing "dimple" concavities, and a tapered posterior part. Postpetiole nearly or quite as broad as long, with convex sides and a little wider in the posterior part, but again narrowed at the posterior border, which is straight.

First gastric (IV true abdominal) segment a little broader than long (holotype: L 0.40, W 0.44 mm), widest in its posterior half, and then beginning to taper caudad; from this point, the 3 remaining visible segments tapering to apex with scarcely any intersegmental constriction. Pygidium with an impressed, nearly flat disc bordered laterally and caudad by a continuous U-shaped margin beset with 20 or more minute denticles; the stout sting issues from the true apex, which is beneath the denticulate margin.

Legs moderate in length, femora (especially fore femora) incrassate in the middle, tibiae moderately incrassate toward apices. Tarsal claws each with a small submedian tooth. Posterior tibiae each with a single broadly pectinate spur; posterior metatarsi without any obvious groove or pore on the basal flexor surface. Middle tibiae without spurs, unless one of the hairs at the apex represents a reduced spur.

First gastric (IV true abdominal) segment about as long as broad, or perhaps a trifle longer than broad. Otherwise as in worker. 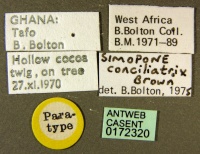