Difference between revisions of "Acromyrmex versicolor"

This species, one of the leafcutter ants, forms large nests with multiple craters that are frequently found in the sandy soils surrounding desert washes. Workers forages in columns, collecting leaves and pieces of leaves ranging from mesquite (Prosopis spp.), Jatropha dioica, creosotebush (Larrea tridentata), buffalo gourd (Curcubita foetidissima) to composite seeds. Nests are large, with probably several thousand workers. Mating flights occur in the morning, and groups of newly mated queens cooperate in the formation of the first nests, a phenomenon known as pleometrosis (Mackay and Mackay 2002). 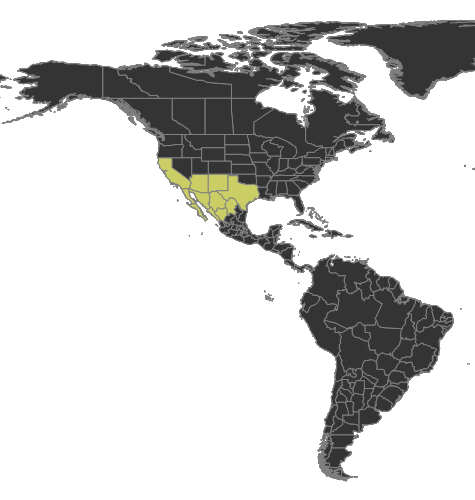 Sporadic from western Texas to southern California but most common in the Sonoran desert of southern Arizona.

A desert species that is common in the Sonoran Desert of southwestern United States and northern Mexico. These ants collect live and dead vegetation to use for the fungus gardens that they cultivate within their nests. This fungus is their primary food source. New colonies of this species can be founded haplometrotically or pleometrotically. Numerous studies have investigated fitness consequences and behavioral aspects of pleometrosis in Acromyrmex versicolor (e.g. Rissing et al. 2000, Cahan and Julian 1999, Hagen et al. 1988). Queens are polyandrous, which is an unusual trait in ants.

Mating flights take place in late summer or early fall on a day following substantial rains. Large mating aggregations can occur with swarms of alates forming elliptical columns above a high bush or other prominent structure (Johnson and Rissing 1993). Wheeler’s (1917) striking account of one such mating swarm provides interesting details about this phenomenon:

“We had left our camp July 30 about 30 miles north of Florence, Ariz., and were crossing the desert on our way to Phoenix. The air was very still and clear after a heavy rain on the preceding day. At 5.50 a.m., just after sunrise, we entered a region several miles in extent where the marriage flight of Acromyrmex (Atta) versicolor was in full swing. The ants were aggregated in numerous sharply defined swarms, each of which was egg-shaped or elliptical, about six to ten feet long and three to four feet broad, stationary some twenty to thirty feet above and with its long axis perpendicular to the surface of the earth. In some places the swarms were only about forty or fifty feet apart but more frequently the distance between them was fully a hundred feet or as many yards. As far as the eye could see over the desert similar swarms could be discerned. Within each swarm the large dark brown males and females were darting about in vertiginous, zigzag flight: Closer examination showed that each swarm was constantly receiving single males and females flying straight to it from a distance, but it did not grow in size because pairs of ants in copula were constantly raining down to the ground from its lower extremity, so that under each swarm there was a dense layer, often a yard or more in diameter, of writhing and struggling ants. One of the swarms happened to be poised above a puddle of water so that the surface of the latter became black with the fallen pairs. We rode for fully half an hour through these swarms, which must have comprised hundreds of thousands of ants. The activity of the insects was truly surprising, for the workers of versicolor are sedate and slow-moving like all other Attii. The whole phenomenon was rendered remarkably clear and striking by the large size and dark color of the ants and their wings, the stillness and purity of the air and the unobstructed view over the level desert.”

Queens will forage outside of their newly founded nests to collect plant material for their nascent fungus gardens. Workers forage along trails, which extend up to 17m, and also forage singly. Acromyrmex versicolor collect both dry and green vegetation. Dry grasses made up a major portion of foraged items in one study population, located 30 miles N.E. of Tempe Arizona (Gamboa 1975). It was also found that a bias for collecting dried vegetation would shift to a preference for green vegetation after periods of heavy rain. Foragers will climb on the desert plants and remove live leaves by excising the petioles.

Foraging activity is temperature dependent (Gamboa 1976) with workers active above ground at surface temperatures between 7.7 and 44 C. During the summer the ants are primarily nocturnal. Beyond the hottest months of the year there is a shift to a diurnal activity pattern, with morning and afternoon foraging bouts beginning and ending with daily changes in temperature.

The type locality of Acromyrmex versicoloris a settlement (also a bay and a mountain) on the eastern slope of the peninsula, south of Bahia San Luis Gonzaga; 950 feet; 29°38', 114°25'. The locality appears on the "World aeronautical charts" as Milino Paraje de Calamaue, at 29°38', 114°23'; it is also known as Calamahue.

Length, about 6 mm. Color reddish-brown. Eyes and apical edge of mandibles, black. All depressions and all prominences appear to be black in a certain light, while the nodes and the abdomen, if viewed from above or in certain directions from the side, have a bright coppery reflection.

Head wider than long, deep and angularly emarginate behind; a rather broad, shallow frontal channel and laterally carinated area beyond insertion of antennae. Posterior angles of head rounded and with a row of six or more short denticles, the last one somewhat longest; three or more teeth may also be observed along the posterior ventral edge each side, the anterior one of which being longest. Frontal laminae broad, somewhat longer than wide, bifid at upper angle; interno-ocular carinae distinct, curved inwards. Clypeus broadly triangular, slightly arcuate in front, with a slight median emargination. Mandibles large, triangular, their apical edge almost straight and furnished with four to six blunt, rudimentary teeth. Scape of antennae rather short, reaching but little beyond posterior angles of the head. Thorax of the usual shape in this genus.

Prothorax with two stout spines each side, the anterior pair farthest apart, longest, inclining forward, the other two stouter, directed backward and outward; two short, stout, backward directed median tubercles or spines in front of the middle of the mesothorax and a still shorter one each side of them at the anterior margin. Metathorax with a deep median depression, the upper edges quite acute, terminating anteriorly in a small tooth like projection. Metathoracic spines rather long and slender, curved backward and outward.

First node of petiole triangular from a lateral view, its two dorsal and the lateral faces quite flat, the edges acute; the upper edges are provided anteriorly with two short, stout teeth, and laterally with two to three smaller denticles each side; there is also a forward directed, acute ventral tooth at base. Second node wider than long, rounded in front and at sides, truncate behind, concave above, the edges acute and beset with four or five short, acute teeth; there is also a prominent lateral Carina, furnished with four or five teeth, and two ventral teeth. Abdomen of the normal shape, the first segment with a depressed median line, and each lateral half with about twenty-five teeth, some of them bifid, arranged in irregular rows. The other segments without teeth or tubercles.

This appears to be related to A. coronata Fab. which differs from this species in the comparatively smoother surface of every part of the body, the longer mandibles and antennae, more numerous and longer denticles of the head, much longer spines of the thorax, lower anterior node and larger and more flattened posterior node of the petiole.

Wheeler (1907) - Length: 8mm. Head resembling that of the worker, but the posterior corners are more acute and the antennal scapes are longer. Pronotum with two broad and rather blunt inferior and two acute superior spines, which are directed forward and outward. Scutellum trapezoidal with bidentate posterior edge. Epinotal spines long, curved and diverging, of nearly uniform thickness up to their rapidly tapering tips which are bent downwards. Petiole and postpetiole similar to those of the worker, but the median pair of teeth in the former longer than the lateral pair and the spines on the postpetiole reduced to small teeth. Gaster pyriform, with the first segment flattened above and without the pointed tubercles.

Mandibles and legs shining; remainder of body opaque. Head coarsely, densely and crenately rugose, the rugae being longitudinal on the sides but diverging from the front and median line on the upper surface. Thorax covered with rugae similar to those on the head, transverse on the pronotum, longitudinal on the mesonotum and pleurae, and irregular on the scutellum. Pedicel and gaster densely and irregularly rugulose; on the middle of the first segment of the latter the rugulae are more regular and longitudinal. Antennal scapes and legs 'coarsely punctate 'and more or less roughened.

Ferruginous brown; upper surface of head, mesonotum and gaster blackish, the mesonotum with a V-shaped red spot on the middle and the gaster with a pair of elliptical ferruginous spots on the basal segment. Wings opaque yellowish brown, with dull yellow veins.

Wheeler (1907) - Length: 8 mm. Head, without the mandibles and eyes, as long as broad, subrectangular, with nearly straight posterior border. Eyes large, protruding, hemispherical, with their posterior orbits at the middle of the head. Mandibles well-developed, acute, flattened and multidentate. Clypeus very faintly and sinuately excised in the middle. Frontal and lateral carinae without teeth. Antennal scapes extending ,fully 1/3 their length beyond the posterior corners of the head. The latter with a small, acute superior and a broad flattened inferior tooth on each side. Pronotum with a larger inferior and much smaller superior tooth on each side. Mesonotum with distinct Mayrian furrows. Scutellum with a median longitudinal depression and a pair of blunt posterior teeth. Epinoturn with short, convex base and longer straight declivity; spines like those of the female but more slender and tapering more gradually. Petiole and postpetiole like those of the female, the former with small acute teeth above and three lateral teeth, the latter with four teeth on each side. Gaster broadly elliptical, with the basal segment flattened above and without tubercles. Genital appendages convex, curved inward, with broad, rounded, subtruncate tips. Legs slender.

Body including the mandibles and legs, opaque; gaster slightly shining. Mandibles finely striated and coarsely punctate. Head, thorax and pedicel densely rugulose, the rugulae being longitudinal on the head, mesonotum, scutellum, pleurae and epinotum, and transverse on the pronotum, petiole and postpetiole. Gaster and legs densely punctate. Genital appendages with a few scattered foveolm. Pilosity like that of the worker and female.