This subterranean (hypogaeic) ant is the only species in its genus that occurs in the nearctic region. A. epedana is dependent on a mealybug species (Rhizoecus colombiensis) for their survival. The ants feed on the sugar-rich feces of the mealybugs, which in turn feed on root-sap. It is presumed A. epedana also feed mealybugs to their larvae. Workers in a laboratory colony refused a variety a food items that ranged from dead insects to sugary substances (e.g. honey, sugar water). This ant’s relationship and dependence on R. colombiensis means they are obligate coccidiphiles.

A member of the decedens species-group, this species is very similar in general appearance to Acropyga goeldii and Acropyga palaga. It may represent a northern population of A. goeldii and thus may be over-split as recognized here (see discussions of A. goeldii and A. palaga for further analysis of problems with some species of goeldii complex). However, differences in the penis valves of the three species suggest they are distinct species. The main difference is in the ventral extension of the penis valve. In A. epedana the ventral extension is much narrower at the base and comes more to a point than in the broadly rounded base of A. goeldii, and lacks distinct ventral curve from the caudal end of the penis valve through the ventral extension found in A. palaga. The head of A. epedana workers are generally not as wide or long as is found in the other two species. Finally, A. epedana workers do not possess very many erect hairs on the mesosomal dorsum, unlike A. goeldii and A. palaga. Instead the dorsum is largely covered in a dense layer of appressed hairs.

USA. Arizona. (LaPolla et al. 2002): Though A. epedana is presently known from 5 sites in southeastern Arizona, it probably ranges south into Mexico through the Sierra Madre Occidental mountain range. A. epedana appears to only occur at higher elevations (where annual rainfall is greater) between 1676m - 1052m, in open oak/juniper woodland habitat.

Known from oak/juniper woodlands with scattered grasses as the dominant ground cover.

Workers are not known to forage above ground. (LaPolla et al. 2002): Laboratory observations of a few captured colonies and what is known about other species in this genus suggest A. ependana is an obligate coccidiphile. Workers in laboratory nests refused food items that ranged from dead insects to sugary substances (e.g. honey, sugar water).

Most colonies have been found with multiple queens but the number of nest samples has been small. Polygyny is believed to be the norm for this species, based on these observations and a scattering of records of other species in this genus (see LaPolla et al. 2002 for references).

(LaPolla et al. 2002): Subterranean soil nests with no exposed ground openings or indication of their presence. Chambers may be located under rocks that are exposed to full sunlight but the full extent of the nest is more expansive. Diffuse tunnels and loosely differentiated chambers are located from 10 - 30 cm underground, some of which intersect roots. Queens, workers, brood and mealybugs are scattered throughout the nest. The nesting biology is similar to A. paramaribensis (now known as Acropyga exsanguis) (Bunzli 1935).

The vertical depth of the colony is likely dependent upon the dryness of the soil. During dry times of the year colonies may be deeper below ground, and quite difficult to find. Colony activities are likely to be closer to the ground surface during the time of the year when mating flights occur and the ground becomes moister.

Mating flights presumably occur sometime from late July through mid-August, occurring when the ground is moister due to seasonal rains. Newly produced queens leave their natal nest for their mating-flight carrying a mealybug in their mandibles. If the queen is able to mate and begin a new nest this single mealybug will serve as the foundress of the ant colony’s mealybug “herd.” The coccid carrying behavior practiced by the queen is known as “trophophoresy.”

A published account (Smith et al. 2007) of the mating flight of this species provides a interesting account of this aspect of the biology of this genus:

A mating aggregation was observed in a shallow ditch alongside a primitive asphalt road, bordered by short grass, just 200 m west of the Southwestern Research Station (1645 m N31°53.028’ W109°12.378’), near Portal, Arizona. Beyond the ditch was a steep incline without vegetation and the ditch and road received direct sunlight for most of the day. The surrounding habitat was dominated by an open oak-pine-juniper forest.

The mating flight occurred 2 days after the first heavy summer monsoon rains (26 July 2005), although there was very little precipitation on the day of the flight. The aggregation was first seen at ~16:30h. Most of the males were hovering or swarming above small clumps of grass and rocks. Females entered the aggregation, after which multiple males simultaneously attempted to mate with them. Males outnumbered females by ~10:1. After mating most females immediately shed their wings and searched for suitable nest sites; only a few females flew from the aggregation. All females carried a mealybug in their mandibles. On 6 August 2005 at the same site, a single alate female carrying a mealybug was found actively mating, but no swarm could be found and only a single male was present. 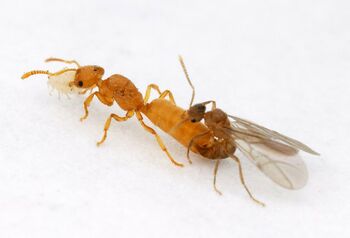 Founding queen carrying a mealybug, in copula with male. Photo by A.L. Wild.

This ant’s relationship and dependence on Rhizoecus colombiensis means they are likely to be obligate coccidiphiles.

Workers meeting within nest tunnels often exhibit a body jerking behavior that is similar to what Weber (1957, 1972) described as jigging.

(Smith et al. 2007): Queens have been found underneath rocks with A. epedana. This association is presumed to be fortuitous. Queens of H. inexorata are likely attempting to found new colonies and the two species are potentially indifferent, at least at this early stage of colony founding, to one another.

Williams and LaPolla (2004): Workers appear to feed exclusively on the sugar-rich feces of this mealybug, which feeds on root-sap. It is presumed R. colombiensis are also culled and eaten for their protein content, being feed directly to larvae and perhaps to the queens.

Individuals have thin cuticles, which makes them highly susceptible to dessication when they are removed from their nest.

Morphology. "Gr., epedanos, weak or feeble, so-called because of the thin, collapsible integument."