Difference between revisions of "Aphaenogaster"

This is a large and diverse genus which is found throughout much of the world (except southern South America and southern Africa).

Aphaenogaster is most often confused with Pheidole or possibly Carebara. They can be separated from Pheidole by the 4 segmented rather than 3 segmented club and larger body size (over 3.4mm long), and from Carebara by the 12 segmented antennae (they are 11 segmented in Carebara). Additionally, both Pheidole and Carebara have major and minor workers (Pheidole is dimorphic, Carebara polymorphic) while Aphaenogaster has only a single worker caste (is monomorphic).

The Australian species of Aphaenogaster show differences which are little more than variation on a theme. This is in contrast to the nearby Papua New Guinea fauna where morphological variation is considerable. This difference suggests that the Australian fauna is composed of closely related species while that of PNG consists of several more distantly related lineages.

These ants can usually be easily distinguished by their elongate, slender habitus (general appearance). Their head is usually longer than broad, eye large, convex and placed at the middle of the head. The mesonotum of the worker is elongate and depressed, the propodeum usually has a pair of spines or small teeth. The workers could be confused with the minor workers of Pheidole, but differ in usually being much larger (over 3 mm total length, usually less than 3 mm in Pheidole), and that the antennal club is poorly defined and consists of four segments (well defined in Pheidole and usually consisting of three segments).

The worker of Aphaenogaster is similar to the minor worker of Pheidole (larger species) and the worker of Kartidris and Myrmica. In the minor worker of Pheidole the masticatory margin of the mandible bears 1 or 2 small teeth between the preapical tooth and the 3rd large tooth. In the worker of Kartidris the vertex has a broad depressed area between eyes, the masticatory margin of the mandible has 5 distinct teeth, the antennal club is distinctly 3-segmented, and the propodeum is unarmed. In the worker of Myrmica the promesonotum is only slightly raised and the propodeal lobe is well-developed as a triangular or sharp lamella. In addition, the palp formula is always 6,4 in Myrmica as opposed to 5,3 or 4,3 in Aphaenogaster.

Distribution is notably concentrated in the northern hemisphere. In the southern hemisphere, they are extremely sparse in the Neotropical and Afrotropical regions, although relatively rich in the Australian region. 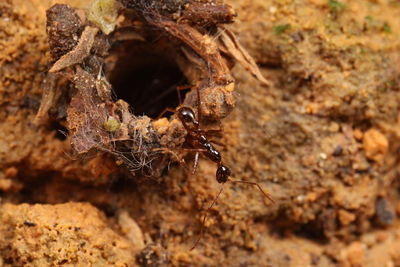 Notes on Australian species: The distinctive nests of Australian Aphaenogaster ants are often the first indication of their presence. These nests can be very dense and when in sandy soils, individual entrances can be large, deep cones or bores (up to 4 cm in diameter and 30 cm deep) with large mounds of loose dirt. This style of nest has resulted in these ants being known as "funnel ants." In some cases nests can be so dense and extensive that they severely affect soil structure, resulting in a loose and fragile surface which easily collapses under foot. When this occurs in situations such as golf courses, pastures and unsealed airstrips damage can be severe and these ants can become a serious problem. Although not aggressive, workers will defend their nests when disturbed, emerging from entrances in small numbers to attack intruders.

While nests can contain large numbers of workers, few workers are usually seen on the surface, and then most are found near the entrance; they are rarely seen foraging any distance from nests. It is known that these ants tend aphids on the roots of plants and that arthropod fragments are often found in the upper portions of their nests. It is possible that the tended aphids provide much of the food needed by the nest, and that the funnel-shaped entrances act as traps for surface foraging arthropods. These factors may combine to reduce or eliminate the need to forage on the surface of the ground.

Notes on North American species: These are elongate, slender ants which are very fast and agile in the field. Most species nest in the soil under stones or logs while some of the desert species nest in the soil with the nest entrance surrounded by pebbles. They are carnivorous, and collect dead insects, as well as tend Homoptera or collect nectar. Colonies are moderately large to very large. This is a common genus and occurs in all habitats, but is especially common in forested ecosystems.

Notes on Vietnamese species: Eguchi, Bui and Yamane (2011) - The majority of species inhabit well-developed forests but some occur in sparse forests, dwarf forests and areas with low bushes. Nests are usually found in the soil, under stones and in rotting logs (Bui & Eguchi 2003, Eguchi et al. 2004).

Unpublished evidence has suggested Aphaenogaster is not monophyletic. A molecular phylogenetic study is needed to resolve this problem.