In the field and with the naked eye resembles a small, slender, shining Amblyopone. Possesses a pedunculate petiole with no differentiated postpetiole. Helium attached low down on the anterior face of abdominal segment 3 (see figure in the Nomenclature section).

"The 4 nests of A. stygia were all found during April-June 1968. Nos. AA 315 NI and AA 318 NI (both May 1968) were taken in sandy alluvial soil of the gallery forest of the Bandama River. The soil surface in each case, while tree-shaded, was bare of herbage. AA 315 NI, a nest fragment of the large form consisting of 12 workers and a single dealate queen, was taken about 10 cm deep, and was found in the same meter quadrat as Amblyopone sp. near normandi. AA 318 NI, 15 workers and a dealate queen, was found about 15 cm beneath the surface and in the same meter quadrat as a colony of Xymmer muticus (as Amblyopone mutica).

The type nest (without code number) was taken 7 June 1968; it and AA a85 N8 came from unburned savanna with dark clayey "terre noire" soil bearing a cover of the grass Loudetia simplex growing about 1 m high. The nest contained about 75 workers, 6 alate and 15 dealate queens, ergatoids, and a a few pupae and pharate adults of queens, males and workers, plus a few larvae of different sizes.

The type nest was 15-20 cm in diameter and cm high, containing the brood, most of the adults, and cut-up remains of a geophilornorph centipede determined by M. Demange of the Muse Nationale d’Histoire Naturelle, Paris, as belonging to genus Schendylurus. This suggests that Apomyrma, like a larger new species of Amblyopone found at Lamto, is a specialist predator of geophilomorph chilopods. Of course, direct observations on feeding are needed.

The colony did not occupy more than a part of the cavity, and it seems likely that the workers merely touched up a pre-existing hollow of some sort. From the main chamber ran several passages in different directions. Their diameter (less than 3 mm), their position and lengths, as far as one could follow them, resembled the paths of vanished grass roots. After finding this nest, the soil was dug carefully for a meter around it and to a depth of 30 cm, but no more specimens were found.

The occurrence of winged sexual adults and pupae in mid-June suggests that Apomyrma has a nuptial season in late June, a little later than that assumed for Amblyopone species at Lamto." 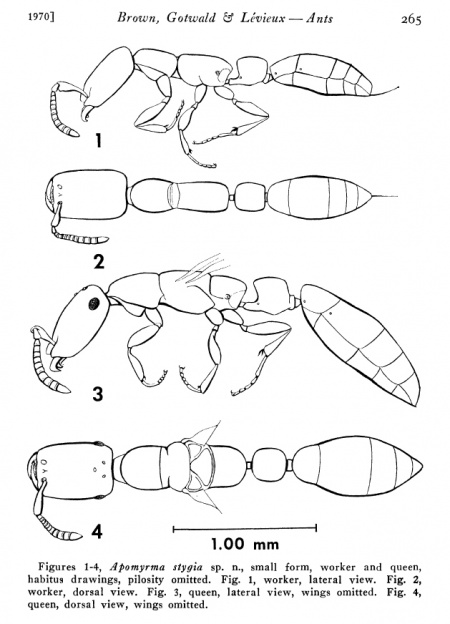 Distinctly more robust than small form; head, truncus, petiolar node, postpetiole and rest of gaster all relatively wider. Color darker, medium ferruginous. Punctures on head a little more numerous and much more distinct, at least in part because of the darker ground color. Otherwise, the large form is very similar to the small form, and probably is no more than a size variant of the same species showing slight allometric tendencies. 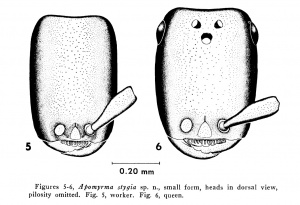 Ergatoid - Two specimens from the type nest are intermediate between winged queens and workers from this nest series in size, and wings or wing stumps are absent. The mesonotum is reduced to a subquadrate piece. Compound eyes are present but smaller than in winged queens; 3 ocelli are present.

Male, pharate adult: removed from cocoon, which is similar in size and color to the small-form worker cocoons with which it was mixed in type nest. Pupal skin partly removed by needle. Total length (TL) about 2.8 mm, HL about 0.4 mm, WL about 1.1 mm. The specimen is still pale, with compound eyes in the purple stage (greatest diameter 0.24 mm), and only the first faint flush of tannish pigmentation showing, mainly on truncal dorsum. Numerous fine brownish points probably indicate the presence of an abundant fine pilosity. Details of smaller mouthparts cannot be made out, since the parts are still soft and transparent, but the mandibles are vestigial, small and triangular, with rounded apices, separated by nearly the whole width of the labrum. Details of middle front of head also obscure, but from what can be seen, not much different from the worker here. Antennae 3-segmented, with very short scape., funicular segments varying from about as broad as long to longer than broad; apical segment longest. Truncus as in Fig. 9; wings not yet unfolded. Petiole short, much higher and broader than long, thick-squamiform, with a free steep, flat anterior face, but attached over nearly its entire posterior face to the next gastric segment (postpetiole). This petiole is an axially-compressed version of the usual amblyoponine pattern. Gaster not unusually long, tapering gradually toward apex; genitalia not distinct, and represented in Fig. 19 only as a rough approximation. The integument, as far as it is developed, seems relatively smooth and featureless overall, though, as mentioned above, the punctulation is apparently rather dense.

Pupae, worker, queen and male, enclosed in white cocoons, about 2.0 to 2.6 mm long in the small form and 3.-3.5 mm in the large form, with conspicuous black meconial spot at one end.

The holotype and some paratypes are deposited in the Musee National d'Histoire Naturelle. Other paratypes are placed in the Museum of Comparative Zoology, the The Natural History Museum, the Musee d'Histoire Naturelle Genève, and elsewhere. The type nest and 3 additional samples all came from the vicinity of Lamto Field Station of the University of Abidjan, south-central Cote d'Ivoire. Lamto is off the main highway 50 km or so south of Toumodi, the nearest town of any size.