In southeast Asia, Cladomyrma live together with mealybugs (scale insects in family Pseudococcidae) in hollowed twigs of a wide range of ant-plants (myrmecophytes) (Moog et al. 2005). These ants protect their host plants against herbivores and prune (at least in part) encroaching vegetation. The ants gnaw open the host plant internodes and hollow them out by removing the pith (Moog et al. 2007). This association is described for at least 9 genera of vascular plants (Eguchi 2007, Maschwitz et al. 1991; Moog et al. 1998, 2005; Agosti et al. 1999).

Agosti et al. (1999) - Cladomyrma is easily recognized among formicine ants by (1) the presence of a minor worker and soldier caste (including some intermediates), (2) an angulate outer margin of the mandible in the soldier caste and the queen, (3) eight antennal segments in queens and workers, and (4) a well-developed acidopore. A full diagnosis and discussion of the genus is provided in Agosti (1991). The antennae of the males is 13-segmented, not 9-jointed as erroneously mentioned by Agosti (1991). A structural analysis of the proventriculus (gizzard) of Cladomyrma is given in Eisner (1957). The lack of discrete characters makes it difficult to assess phylogenetic relationships within Cladomyrma. Two groups might be recognized by the shape of the queen petiole, which in one case is dorsally truncate and low, and in the other an erect node or scale. Whereas some species, such as crypteroniae and maschwitzi are very distinct, most other species require some expertise or reference collections for identification. Size of minor workers is rather variable during a colony cycle, with the first workers (= nanitics) being much smaller than those after the presence of some thirty workers or more. Size is therefore a very ambiguous character for the identification of species.

Agosti et al (1999) - Cladomyrma is a formicine genus whose species live exclusively in a variety of trees and vines from Borneo and the Malay Peninsula. To our present knowledge Cladomyrma inhabits 18 host plant species from 9 genera and 8 families ([1–4], unpublished results). These ants protect their host plants against herbivores ([4, 5], unpublished results) and prune (at least in part) encroaching vegetation. Cladomyrma utilize live pithy stems as nest sites. Colony-founding queens gnaw entrance holes in suitable soft young internodes and excavate a chamber in which they rear their first brood in isolation. The initial founding chamber is later expanded by the emerging workers (Maschwitz et al., 1991; Moog et al., 1998). An individual plant sapling can host multiple incipient colonies in different internodes, but eventually a single monogynous colony monopolizes the entire host plant. New internodes will be colonized successively. Eventually the nest chambers run through stem, branches, and every twig. Mature colony size is variable but is typically several thousand workers. In large nests, worker numbers may reach 10,000 in Saraca trees (8 m in height) and about 30,000 in Neonauclea gigantea (ca. 15 m) (Agosti et al. 1999). In mature colonies, the often physogastric queen is usually found in the lower part of the host plant, and the brood is dispersed throughout the colony space. 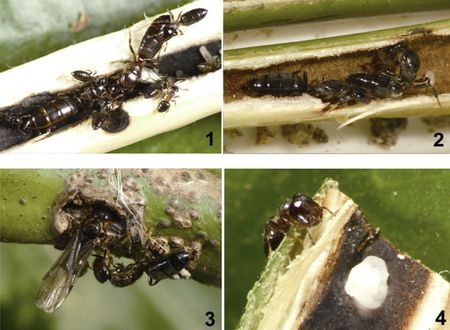 Established colonies never lack sap-sucking scale insects inside the nest hollows, and the ants appear to be dependent on their honeydew excretions (Moog et al. 2005). Dissection of 338 founding chambers of eight Cladomyrma species showed that coccoid abundance strongly increases with founding age. The scale insects belong to a wide range of taxa, mainly Pseudococcidae. Coccidae are rare except in Cladomyrma maschwitzi.

Moog et al. (1997) - Founding queens, using their mandibles to create nest chambers in host plant stems for colony foundation, frequently disappear during heavy rain. These queens sometimes drown when seeking refuge in their unfinished, still unclosed chambers due to runoff water which collects in the hollow internodes via the entrance holes. In all host plants the entrances are situated more or less at the lateral sides of the internodes. Thus the risk of getting runoff-water into the nest chambers is reduced (except for the vertical stem). However, rainwater may still be able to collect in the nest. Mature colonies of these ant species face the same problem of intruding rainwater endangering ant brood and trophobiotic mealybugs, but they respond with an unusual behaviour. Workers of Cladomyrma petalae and Cladomyrma maschwitzi ingest the liquid and regurgitate it to the outside until no standing water remains. This water bailing behaviour can be readily provoked by injecting small amounts of liquid into inhabited internodes. The ability of Cladomyrma to remove water from its nest site appears to be an adaptation to their obligate colonization of myrmecophytes. 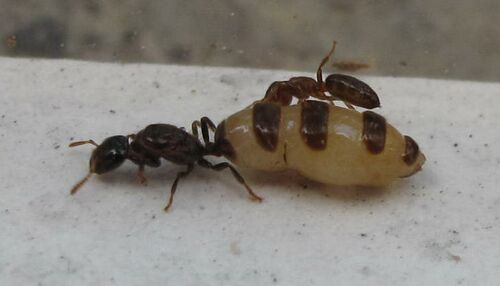 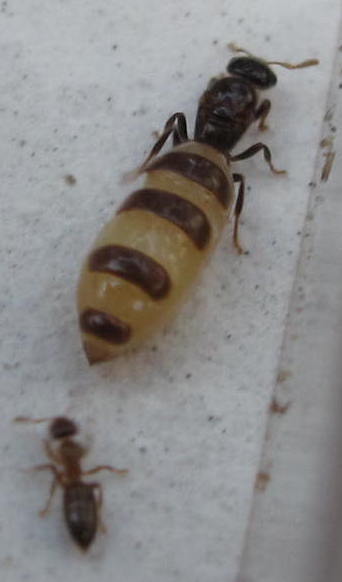 Both workers and soldiers are described from various species (Agosti et al. 1999). Jaitrong et al. (2013) has illustrated the morphology of queens, soldiers and workers in Cladomyrma sirindhornae.