Combining in formation from labels and field notes of Kempf and Lenko, we can say that this species occurs in the “cerrado” (samples #4151, 4246, and 4472). Although we have no clear information on the collecting sites of most samples, all localities we listed above are (or were) cerrado areas. Lenko recorded nests as subterranean, with one circular entrance circled by a 3 mm sand crater, surrounded by a 5 cm high mound with 12 cm at base. He has also recorded the workers of sample #4472 carrying minute plant fragments and very small seeds of grasses and other unspecified items. The Botucatu sample label says “pasture.” (Brandao and Mayhe-Nunes 2001)

Brandao and Mayhe-Nunes (2001) - Mycetagroicus cerradensis is easily recognized by three features: the presence of two prominent clypeal concave projections, rounded at apex, the subtriangular frontal lobes, and the absence of median pronotal teeth. 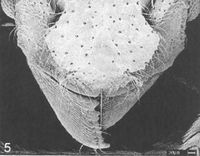 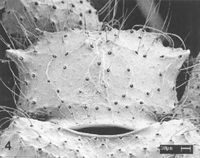 TL 3.36; HL 0.92: HW 0.92; IFW 0.52; ScL 0.78; TrL 1.34; Hfl 1.23. Uniformly brown-yellowish to medium brown: gaster darker than the rest of the body in the two Minas Gerais samples; the Paraopeba workers have also the frontal disk of the head darker than the rest of the body. Long and dense pilosity all over the body, hairs mostly erect, but flexuous, little shorter on the appendages than in other regions of the body.

Head. Dorsal surface of the mandibles with some 30 rugulae over a straight line perpendicular to the external margin at midlength, ending abruptly at the smooth flange parallel to the masticatory margin. Masticatory margin with an apical tooth followed by 7-10 minute regularly spaced teeth, except for the basal one which is separated from the others by a small diastema; the subapical teeth of similar size and triangular in young workers; external margin almost straight at base, weakly concave at apex, curving inwards at the level of the third subapical tooth. Clypeus with pronounced concave anterolateral projections with rounded apex, at each side, arising near the base of the frontal lobes. Frontal area triangular, depressed but mostly Inconspicuous. Frontal lobes subtriangular. the anterior border rounded, crenulated, and almost as long as the straight posterior borders: faces meeting in an attenuated angle of circa 120°. Frontal carinae sinuous, weakly diverging caudad, fading before reaching the occiput. Eyes with 12 facets across its greatest diameter. Antennal scapes surpassing the occipital corners by near one third of their length, when laid back over the head as much as possible. All funicular segments longer than broad.

Alitrunk. Lateral pranatal spines triangular when seen from above. projecting laterad when seen in frontal view. Pair of median projections on pronotum very short or absent; middle of the mesonotum with a low protuberance, better seen in side view, microscopically tuberculated. Anepisternum separated from katepisternum by a strong ridge. Metanotal groove relatively large in side view, shallowly impressed. Propodeal spiracle opening slit-shaped in side view.

The name refers to the distribution of this species, known only from the Brazilian “cerrados,” a savanna-like formation that once covered most of the Brazilian Central Plateau.