This species is only known from two collections.

See the description below.

Aside from the type series, this species has also been recorded by Santschi (1925: 164) from Fives Lille, in Santa Fé Province, Argentina. I have not seen these specimens (Kempf 1964).

Kempf (1964) - According to Luederwaldt (1926: 267) the nest of this species was found in an open field (same habitat as Mycocepurus goeldii). The cavities were subspherical. The fungus garden is sessile.

Ramos-Lacau et al. (2015) studied Mycetophylax lectus in a transitional area (savanna-forest) between Atlantic forest and cerrado (Brazilian savanna) disturbed by an annual fire regime, in Southeast Brazil. Colonies were located in June 2005 after a bushfire. Eight nests were excavated, five in June and three in October. They found:

Colonies were aggregated and located relatively close to each other, with a mean distance between them of 3.38 ± 2.75 m. The external nest structure of the ant consisted of a single circular nest entrance hole with mean diameter of 0.21 ± 0.06 cm but without a well-formed nest mound on the ground surface. The diameter of nest-entrance hole varied significantly between colonies (t test = 8.22; p < 0.001). The internal structure was formed by a single oval chamber connected to the outside via a single gallery. A yeast-like fungi forming a spongy mass was observed and disposed at the bottom of the chamber. No dedicated garbage chamber was observed in all studied colonies.

Alates (young reproductive females and males), larvae and pupae were found only in one colony (sampled in October). This colony contained eight females, two males, three larvae and nine pupae. None of the eight investigated colonies contained eggs. A single dealate queen was observed in each eight studied colonies strongly suggesting that this species is monogynous. 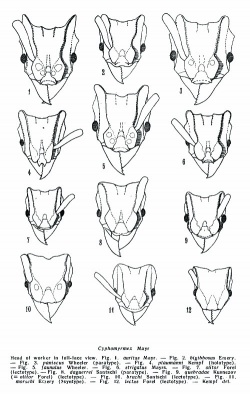 Head (fig 12). Mandibles finely reticulate-punctate and vestigially striolate; chewing border with 7 teeth; apical tooth prominent. Anterior clypeal border slightly notched in the middle, laterally with a small tooth. Frontal area more or less distinct and impressed. Frontal lobes greatly expanded laterad, covering in full-face view part of the eyes, anteriorly rounded, then diverging caudad and somewhat sinuous, rounded behind before the gentle constriction; frontal carinae prolonged caudad, slightly diverging, joining the narrowly crested preocular carina to close the antennal scrobe at the scarcely drawn-out occipital corner. Occiput broadly but gently emarginate, with another median and deeper emargination between the short and inconspicuous carinae of the vertex. Supraocular tumulus feeble and indistinct. Inferior border of cheeks immarginate, except for a short and low foliaceous carina in front of the inferior occipital corner. Scapes in repose not surpassing the occipital corner. Funicular segments II-VIII not longer than broad.