Snelling and George (1979) report that in southern California xerophila (“tucsonica”) occurs at 150–1500 m, in creosote bush scrub and Joshua-tree and oak-juniper woodland. The colonies contain 30-40 majors and 300-400 minors and build small, low craters in the sand, often surrounded by seed chaff. Caches of seed are present. Similarly, G. C. and J. Wheeler (1986) found the species (“subspecies tucsonica”) locally abundant in southernmost Nevada, where it forms crater nests in fine sand, sometimes ringed by seed chaff; the nest chambers also contained insect fragments. In western Texas, Moody and Francke (1982), found the species relatively common between 600 and 1800 m, nesting mostly in open soil but occasionally beneath stones. In the Chihuahuan and Sonoran deserts of southern Arizona and New Mexico Stefan Cover (personal communication) found it one of the commonest Pheidole, occurring with Pheidole hyatti, Pheidole rugulosa and Pheidole soritis. It harvests seeds along trunk trails, with the large majors often accompanying the minors. (Wilson 2003)

Mackay and Mackay (2002), reporting on the synonymized Pheidole tucsonica - The major of this species can be recognized by viewing the head in profile. The head is obviously narrowed towards the apex, and the eyes relatively large, with more than 70 ommatidia. The anterior 1/3 of the head is covered with rugae, with the intrarugal spaces smooth and shiny, the posterior 2/3 of the head and the tops of the posterior lateral lobes are smooth and glossy. The scape is gradually bent at the base and extends about 1/3 the length of the head. The dorsum of the pronotum is coarsely sculptured, with transverse rugae or coarse striae, with the intrarugal spaces punctate. The humeral angles are developed as swellings, the lateral connules are developed, but blunt. The minor worker has a glossy dorsal surface of the head, the sides of the pronotum are smooth and glossy, the top is finely sculptured and at least the center of the dorsal surface is smooth and glossy.

A fully developed colony may consist of thirty or forty majors and as many as two or three hundred workers, although many colonies do not reach this size. Both races sometimes construct a small, low crater, but this is not a constant feature of the nest. During much of the year the only external evidence of the nest is its small, circular entrance which is usually about 2 mm. in diameter. Chaff piles are rarely produced. The senior author has encountered well-developed chaff piles in only one station (15 miles north of Guaymas, Sonora). The infrequent presence of a chaff pile may be due to its dispersal by wind or rain (as is true of the crater) or it may be due to a tendency of the ants to carry seed hulls well away from the nest before dropping them. Both majors and minors forage and usually form files when doing so. In southern Arizona the marriage flight occurs in July. (Creighton and Gregg 1955)

Mackay and Mackay (2002), for the synonymized Pheidole tucsonica - This species nests in the soil, where mounds may be small or crater-like, it is occasionally found nesting under stones. Brood is found in nests in April and September, sexuals in September. Foragers work in columns. This species is very common in southern New Mexico, but was not collected anywhere else in the state.

Tripet et al. (2005) examined aggression between colonies, as a follow up to some earlier findings on inter-colony aggression by Langen et al. (2000), by placing sets of workers from different colonies together in an arena. It had been observed that colonies defend territories and that their nests are overdispersed, with the latter typical of species that compete for resources with conspecifics. The source population for the studied colonies were from Mojave Bajada habitat within the Eastern Mojave desert (San Bernardino Co., Calfornia). Colony density was 3 colonies per 100m2. Relatedness within colonies, measured using 4 microsatellite markers, varied from .42 to .75. Aggression between colonies did not vary with inter-colony relatedness. Different colonies either tolerated one another and did not fight, or fought very aggressively.

From Wilson (2003): DIAGNOSIS A small, large-eyed member of the pilifera group, close to Pheidole gilvescens and distinguished as follows.

Major: parts variously reddish yellow to light reddish brown; postpetiolar node transversely conulate, nearly 2X broader than the petiolar node; sides of pronotum mostly free of carinulae, and smooth. With Pheidole gilvescens, also similar to Pheidole bajaensis and Pheidole yaqui, both differing in the major by the flattened profile of the dorsal posterior half of the head in side view, and by the head tapering conspicuously from the midline to the occiput in side view. The form “subspecies tucsonica” is here treated as a geographic variant with a transversely rugulose pronotal dorsum (as figured above), which as Creighton and Gregg (1955) pointed out, is found from central Texas westward through southern New Mexico and Arizona to the mountains of southern California and southward into Sonora as far as Guayamas. “Typical” xerophila, with a mostly smooth pronotal dorsum (see figure) ranges from the Big Bend of Texas into southwestern New Mexico. Because intermediates in the pronotal sculpturing occur in central Mexico, Creighton and Gregg (1955) treated tucsonica as a subspecies of xerophila. Snelling and George (1979), although confirming the intergradation, raised tucsonica to species level, and this step was followed by G. C. and J. Wheeler (1986g). On the evidence I have kept tucsonica as part of xerophila, but this is not a firm conclusion; Snelling and George may be right in considering the intermediates as no more than rare hybrids. 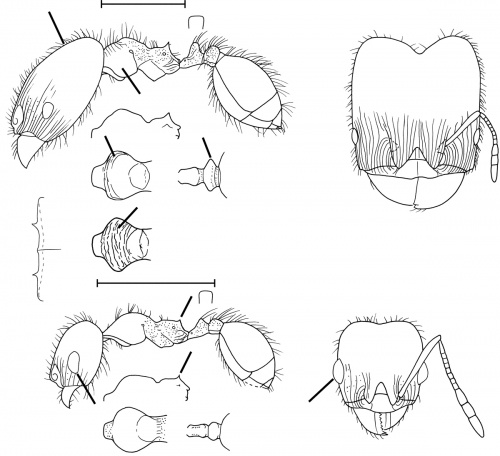