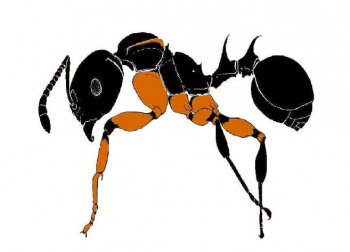 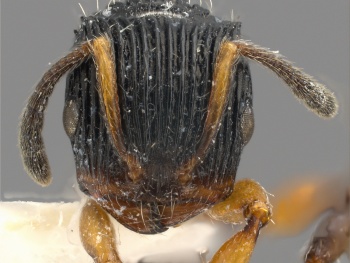 Bolton (1981) - Monomorphic arboreal myrmicine ants. Mandibles armed with 5 or 6 teeth. Palp formula 5, 3 (alluaudi) or 4, 3 (bottegoi, elegans, luteus. piceus, scotti). Anterior clypeal margin with a median notch or impression. Median portion of clypeus broad and broadly inserted between the frontal lobes, bounded laterally by a pair of widely separated carinae which run to the anterior margin; lateral portions of clypeus unmodified. Frontal lobes narrow, continuing back into a pair of more or less straight frontal carinae which are usually roughly parallel and relatively close together on the dorsum of the head. Towards the occiput the frontal carinae either fade out or are sharply angled outwards as a ridge or row of tubercles which runs to the sides of the head. Antennal scrobes absent or at most the sides of the head below the frontal carinae with a broad and very shallow concavity. Antennae 12-segmented with a 3-segmented club, the scapes when laid back failing to reach the occipital margin. Eyes large and conspicuous, situated at or in front of the midlength of the head. Occipital corners tuberculate or denticulate in full-face view. Pronotum marginate laterally and usually also anteriorly, the lateral marginations generally simple but sometimes expanded into ornate lobes or flanges. Pronotal shoulders angulate, denticulate or tuberculate in dorsal view. Promesonotal suture absent on the dorsum or represented by a line or slight indentation, only rarely easily visible. Mesonotum usually marginate laterally and forming a low projecting angle or tubercle in dorsal view; rarely immarginate and armed with a sharp denticle laterally. Metanotal groove impressed, most frequently only shallowly so but deep in some species; very shallow indeed in some samples of elegans. Propodeum bluntly marginate to rounded laterally, unarmed or with a pair of denticles or teeth. Metapleural lobes large and strongly developed; ventral margin of metapleuron with a strong broad groove running forward from the orifice of the metapleural glands. Ventral surface of alitrunk between hind coxae entire, simple, without a broad deep circular pit. Middle and hind tibiae frequently with a distinct simple spur, the spur reduced in some and indistinguishable from the hairs of the tibial apex in others. Petiole with a short, stout anterior peduncle, the node narrow and tapering dorsally so that it appears triangular or conical in profile. In anterior or posterior view the narrow dorsum of the node either forms a transverse crest or is indented medially so that a pair of blunt prominences are formed laterally. In some these prominences are acute and dentiform, in others developed into quite long teeth; rarely the petiole is strongly bispinose. In one species (scotti) the petiole is developed into a very high plate dorsally which has a central emargination. Postpetiole simple or armed dorsally with a transverse crest or a single spine. Pilosity very variable, some species densely hairy, others almost hairless. Sculpture generally of coarse rugae or sulci, but reduced in the African species piceus, elegans, luteus and velatus.