Fernández (2007) - Besides the 10 segmented antennae, this species can be distinguished by its mesosomal shape in lateral view, in which the propodeum forms a weak angle between the faces. The petiolar shape (peduncule longer than the node) and the near lack of sculpture on the mesopleuron and lateral propodeum also makes this species easy to recognize. The anteroventral tooth of the petiole is larger than that of other workers of the genus. Almost the entire body (except for the propodeum) possesses long hairs that are longer than the last antennomere.

Dejean et al. (2005) described a tripartite association (insect- plant- fungus) where a communal trap is constructed to ambush prey. The ants cut spines (trichomes) from the ant-plant in which they live (Hirtella physophora), and use them to build a matrix on which an ascomycete mycelium is encouraged to grow. The resulting construction is a platform-like structure with holes having exactly the right diameter to let the ants’ heads and anterior legs pass (Corbara 2005). This elaborate platform functions to trap jumping or flying insects that land on it. These are attacked by the ants from below, cut into pieces and brought back to the domatia. 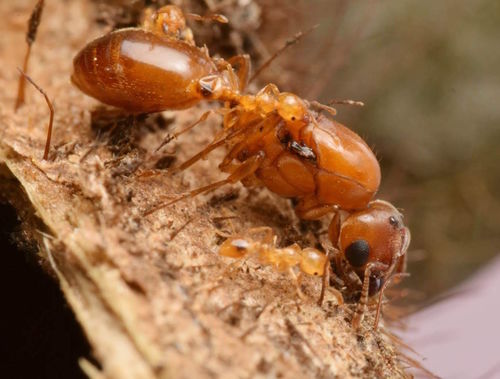 Dealate queen and workers of Allomerus, showing a strong dimorphism in body size. Note the spines of host-plant Hirtella physophora that are incorporated in insect traps. From Nouragues, French Guyana. Photo by Philipp Hönle.

Fernández (2007) - The holotype was not seen. The redescription should be used cautiously because the original description is based on French Guiana queen and worker samples, in which worker possesed 10 segmented antennae. There is a worker from the MZSP (HW 0.50 HL 0.55 SL 0.28 WL 0.50 GL 0.55 TL 2.03 CI 90 SI 56) collected in Brazil (Amazonas, Manaus, Fazenda Esteio, Colosso, mata continua controle, 26 nov to 1 dic 1997, C. Klingenberg col.) with a 10 segmented antennae. This worker is smaller than the one studied from French Guiana and the propodeum is less angulate and does not show the angulation.

Antennae 10 segmented, scapes fail to reach posterior lateral corner of head, distal half thickened. Metanotal suture shallow and broad. Propodeum unarmed, dorsal face almost absent followed by declivous face, slightly angulate between faces. Propodeal spiracle small. Petiole with peduncle and with node well defined, node shorter than peduncle. Petiolar anteroventral spine well developed. Sides of mesopleuron and propodeum with few longitudinal short and irregular carinulae. Hairs abundant on dorsum of mesosoma. Long hairs (greater than 0.13 mm in length): six on front of dorsum of head, near vertexal margin and decumbent; two rows of several hairs on frons; several on promesonotum, none on propodeum, several on petiole, postpetiole and gaster. Short hairs (less than 0.07 mm) on all the dorsum of the mesosoma, few are present on propodeum. Row of short hairs present on the anterior clypeal margin, central being the longest, all projecting over anteclypeus. Antennae and legs with apressed pubescence. Concolorous brownish yellow, hairs whitish.