This ant is common in beach scrub habitat in Cabo Rojo, Dominican Republic. Nests there are made in the ground in open sandy areas, surrounded by a small crater of excavated material. The workers, like many of their congeners, move swiftly and are active at high temperatures.

Similar to Dorymyrmex insanus but with a posteriorly declivitous mesonotum, i.e., there is not a distinctive step down between the mesonotum and pronotum.

Caribbean, known from both the Greater and Lesser Antilles. 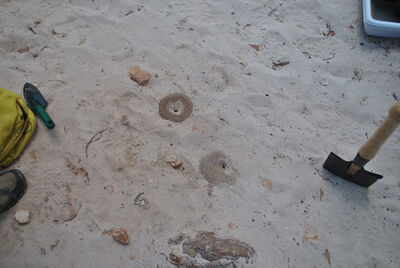 This species was orginally described Auguste Forel (1911) as Dorymyrmex pyramicus subsp. brunneus var. antillana and thus is an unavailable quadrinomial. The type locality is St. Vincent in the lesser Antilles. This was treated as a synonym of Dorymyrmex insanus by Snelling (1973), an erroneus assignment, and later removed from that synonymy by Snelling (1995). Workers differ from those of Dorymyrmex insanus by the posteriorly declivitous mesonotum (the middle segment of the thorax slopes downward). The gyne differs from that of Dorymyrmex insanus (and all known North American species) by the presence of numerous short, stiff erect hairs on the head and mesonotum. Forel (1911) originally described this as a variety of the Argentinean Dorymyrmex brunneus, which it closely resembles. Workers, especially, are very similar but the mesosomal profile is subtly different. Again, the gyne differs in its extreme hairiness; those of Dorymyrmex brunneus do possess some erect hairs on the head and mesosomal dorsum, but not to the extent seen in Dorymyrmex antillana.