This species is a social parasite. In the original description Smith reported the type material was accompanied by 24 workers of the host species Leptothorax muscorum (as Leptothorax acervorum subsp. canadensis). It has also been reported with Leptothorax canadensis (Beibl et al., 2005; de la Mora et al., 2021).

Smith (1939) - The ergatoid female of Harpagoxenus canadensis can be distinguished from the worker of Temnothorax americanus by the narrower and deeper median emargination of the anterior border of the clypeus, the shallower antennal scrobes, the toothless or finely denticulate mandibles, and the blunter, superior border of the petiole. It differs from the ergatoid female of Harpagoxenus sublaevis in the following characters: Posterior border of head not so strongly emarginate; clypeus with a narrow median emargination on its anterior border; no erect hairs on the antennal scapes; antennal scrobes much shallower; petiole lacking the sharp lateral carinae; and postpetiole without the long, distinct, ventral tooth. 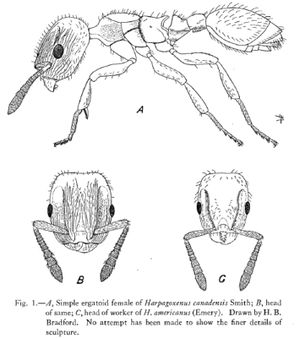 Head subrectangular, distinctly longer than broad, with very feebly emarginate posterior border, rounded occipital angles, and moderately convex sides. Eye convex, separated from base of mandible by a distance greater than eye's widest diameter. Mandible rather small, less convex than that of americanus, masticatory border obliquely, concavely curved, toothless or very finely denticulate. Anterior border of clypeus with a rather deep median emargination, which is narrow (much narrower than that of americanus); posterior border of clypeus broadly rounded, extending backward between frontal carinae. Frontal area not clearly defined. Frontal carinae subparallel, not strongly elevated, extending beyond apices of antennal scapes but not forming such deep and distinct scrobes as in americanus. Antenna 11-segmented; scape stout, curved, and strongly depressed; last three segments of funiculus greatly enlarged, ultimate segment exceeding the combined length of the two preceding segments, funicular segments 2-6 each clearly broader than long. Vertex with a distinct median and two extremely small, indistinct lateral ocelli. Thorax, from above, with distinct promesonotal, and mesoepinotal sutures, the mesoepinotal region strongly constricted; epinotum with a pair of moderately long, coarse spines which are directed upward, backward, and outward. Petiole, viewed laterally, with convex posterior surface, which meets the anterior surface in such a manner as to form a bluntly angular node; ventral surface of peduncle with a short, blunt, anterior tooth, but no prominent midventral plate as in sublaevis; viewed posteriorly, sides of petiole converging toward superior border, which is narrow laterally and faintly emarginate. Postpetiole distinctly broader than long, broader anteriorly than posteriorly, and with pronounced angular humeri; lacking ventrally the prominent tooth or spine of sublaevis, but with a very weak anterior tubercle. Base of gaster much constricted, very little broader than the postpetiole, and with slightly angular humeri.

Hairs moderately long, suberect to erect, sparsely distributed over body and on coxae, trochanters, and femora, especially the ventral surfaces of the two latter. Pubescence rather long and coarse but sparse, closely appressed on the body, suberect on the appendages. 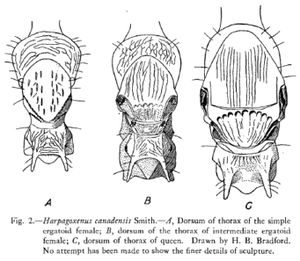 Thorax, viewed from above, differing from that of the queen as follows: Paraptera of mesothorax fused with scutum; anterior wings represented by black, sclerotized stubs; scutellum not clearly separated from preceding part of mesonotum, trapezoidal, wider anteriorly than posteriorly; paraptera of metathorax fused with metanotum, forming a trapezoidal area similar to scutellum but smaller; posterior pair of wings represented on each side by a small rough area, out of which projects a whitish appendage; epinotum like that of queen; petiole, viewed laterally, with posterior surface less convex than in the simple ergatoid female, and therefore more acutely angular. Sculpturing very similar to that of the simple ergatoid female but with a rather distinct row of transverse foveolate punctures anterior to the scutellum. This form represents an intermediate stage between the simple ergatoid female (which is decidedly more workerlike) and the more structurally complex queen. The drawings representing a dorsal view of the thorax of each of the three forms (fig. 2, A, B, C) show the differences between them.

Larger than the ergatoid female. Also differing in the structure of the thorax. Similar in other ways except for the following differences: Anterior angles of head more protuberant. Posterior border of head more deeply emarginate. Ocelli larger and more conspicuous. Posterior surface of petiole less convex, thus causing the dorsum of the node to appear more acutely angular, when the petiole is viewed in lateral profile. Ventral surface of peduncle with a slight median plate, which ends in a blunt tooth anteriorly. Thorax, from above, with subangular humeri. Scutum of mesothorax bluntly angular anteriorly, forming an angle of considerably less than 90 degrees; parapsidal furrows present. Sculpturing similar to that of the ergatoid female but posterior surface of head more shining. Scutum and scutellum with a few weak but distinct longitudinal rugulae.