This species is presumed to be an arboreal nester since the holotype was collected via canopy fogging. The sampled tree was located in a primary forest reserve on Mount Atewa in the eastern region of Ghana. A few subsequent collections have come from vegetation beating and litter sampling.

The combination of the 12 segmented antenna, prominent eyes that are situated at the posterolateral corners of the head, the enlarged first gastric tergite that forms a large subspherical ball, and the forward projection of the well developed sting set this species apart from other Myrmicininae.

Only known from a few collections.

The single species of this genus is known only from the worker caste.

Bolton (1971) has speculated, based on analogous morphological features found in other species and the initial collection of a worker from an arboreal sample, about the basic biology of this interesting ant. This account also provides some detailed collection information about the holotype:

"The specimen was obtained by blowing pyrethrum into the canopy of a tree and collecting the insects thus killed upon white sheets, previously placed around the base and under the canopy of the tree. The locality of the capture, Mount Atewa, is part of a primary forest reserve situated near Kibi, in the eastern region of Ghana.

The most obvious character setting this genus apart from all other myrmicine ants is the unique structure of the gaster. This adaptation of gastral structure is, however, known from a number of genera in the subfamily Ponerinae, where the second gastral segment (homologous with the first in Myrmicinae) is affected. However, in none of these ponerine genera (Proceratium Roger, Discothyrea Roger, and the Bothroponera nasica (=Loboponera nasica) Santschi species group of the genus Bothroponera (=Loboponera) Mayr) is the modification carried so far as in Ankylomyrma, and although the first tergite is always larger than the sternite the latter is never reduced to a mere collar, and the suture between it and the sternite is visible; although Gotwald (1969) has proved that the two sclerites are fused in most Ponerines. Brown (1958), in speaking of the vaulting of the gaster in Proceratium states that, 'The reduced apical segments bear a stout sting and are retractile to some extent within the second segment,' In Ankylomyrma the process has been taken still further, so that the reduced apical segments are completely concealed by the first and only the sting projects beyond the limits of this enlarged segment. Brown (1957) has shown that in the Ectatommine genera Proceratium and Discothyrea the ants are mainly predators upon the eggs of other arthropods. It is possible that the adaption of the gaster provides some advantage in this form of predation, but it seems unlikely that a relatively large, arboreal form such as Ankylomyrma has similar food preferences. I t would indeed be interesting to discover what this ant subsists upon.

The fringe of spines and teeth borne upon the occipital lamella, and the shape of the occiput itself tends to indicate that in life the head is carried at right-angles to the long axis of the body. The tremendous array of spines and teeth on the head, alitrunk and pedical suggests that if the ant is disturbed it will either roll up and fall from the tree or merely take a tight grip of the bark and present any potential predator with an efficiently armoured surface, as is seen in some of the larger species of the genus Cataulacus F. Smith. Predator size would probably determine which of these reactions was adopted, as in the last-named genus.

The nesting site of the species is unknown, but it may make nests of vegetable fragments either on the undersides of leaves or in the forks of twigs." 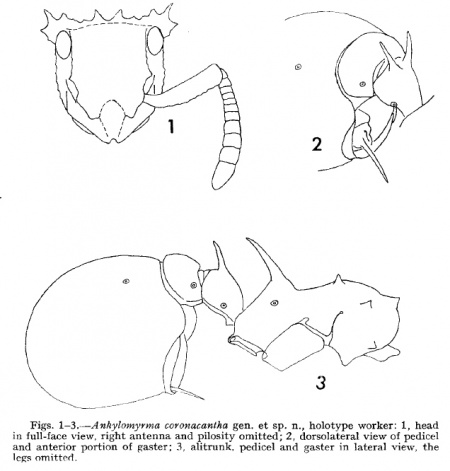 Mandibles with four teeth visible, probably with five actually present, the apical tooth the largest, decreasing in size posteriorly. Median portion of clypeus raised, strongly projecting over the mandibles and bluntly bilobed anteromedially, concealing the mandibles from full-face view. The lateral portions of the clypeal suture are absent, but between the frontal carinae the median portion of the suture is apparent as a shallowly impressed, arcuate line. Frontal carinae widely separated, divergent posteriorly and then passing through an angular prominence. Behind this they are continued to the occipital margin by a pair of approximately parallel raised ridges. Eyes well developed, maximum diameter ca. 0.36mm, situated in the posterolateral corners of the head capsule. Below the eye, a ridge forming the ventral margin of 'the shallow antennal scrobe and the lateral margin of the head in full-face view, runs to the mandibular insertion. Between the frontal carina and this ventral ridge are a pair of short, longitudinal carinae. The first arises below the posteriormost point of the antennal socket and runs for about 0.40 mm towards the eye; the second is situated below the first but arises from the clypeal margin and ends at about the midlength of the first carina. Occipital margin with a transverse, translucent lamella which is raised into numerous teeth and spines and is continuous below the eye on each side with the ridge forming the ventral scrobal margin. Antennal scapes curved shallowly backwards at the base, their leading edges weakly serrate.

Pro- and mesonotum fused dorsally, in profile broadly dome shaped, the mesonotum sloping behind to the short propodeum; the dorsum of the latter being noticably on a lower level than the dorsalmost point of the promesonotum. Metanotal groove absent. The alitrunk is armed as follows: Pronotum: dorsally with a pair of broad, blunt tubercles; dorsolaterally, just anterior to the pro- mesonotal junction, with a pair of broad, acute teeth; humeral angles bluntly denate; anterolateral pronotal angles drawn out into a bluntly rounded tooth. Mesonotum: laterally, at the point when' the scleritc hegins to slope to the propodeum, with a pair of broad, acute teeth. Propodeum: the entire dorsal face is used as a base for a pair of long, divergent, posteriorly directed, slightly curved, acute spines. On the legs, the apex of each tibia is armed with a pair of dentiform processes dorsally; on the middle and hind legs each tibia with a single, simple spur ventrally.

Petiole armed with a pair of divergent, acute spines which point posteriorly. In profile the peduncle short, rounding into the dorsal face of the node. Subpetiolar process a small, broadly triangular tooth situated towards the anterior end of the peduncle. In dorsal view the petiole gradually broadening from front to back, its maximum width ca. 0.50 mrn. Postpetiole much broader (0.93 mm at maximum), about twice broader than long in dorsal view.

The gaster massive, subglobose, consisting chiefly of the tremendously enlarged first tergite which has developed into a subspherical ball, opening anteriorly below the postpetiole. The first sternite is visible as a narrow collar around the ventral portion of this orifice and the remaining tegites and sternites are telescoped together inside this closed system. The well developed sting projects anteriorly from the orifice.

All surfaces of the head, body and appendages with thick, erect, yellowish hairs. Pubescence is limited to the appendages, and is much more dense upon the funiculi than upon the legs.Mandibles very finely and densely longitudinally striate, the teeth themselves smooth and shiny. Dorsum of head between the frontal carinae and between the ridges which extend to the occipital margin very coarsely reticulate-rugose, the bases of the reticulae finely shagreened and dully shining. Clypeal apron and scrobal areas on sides of head very finely reticulate, as is the occipital surface of the head. Dorsum of promesonotum with sculpturation similar to that of dorsum of head; this scupturation continued onto the sides of the pronotum but gradually fading out basally and posteriorly, replaced on the pleurae, the sloping portion of the mesonotum and the propodeum by a fine, dense reticulation. Femora finely and densely reticulate but the tibiae with some reticulo-rugulation. Petiole, postpetiole and gaster coasely foveolate, the interspaces finely and densely reticulate, the bases of the individual foveolae shagreened.

Black, with the mandibles, clypeal apron, antennae, parts of the occipital lamella, the tibiae and tarsi and first gastral sternite orange-brown to red-brown.