Mann (1922) - This species differs from Belonopelta attenuata in its shorter and broader head, the clypeus more projecting and narrowly rounded in front, the more slender and arcuate mandibles with much longer tips, the longer antennal scapes, smaller size and in having on the head coarser, separated punctures in addition to the dense and subtile punctation.

Wilson (1955) reported the following in regards to the biology of this species.

In rainforest near the village of Pueblo Nuevo, Veracruz, in the Cosolapa Valley ten miles south of Cosolapa.a single worker was discovered in a rotting, but still firm, section of tree branch, two inches in diameter, buried in deep lea litter between the buttresses of a large tree. It was in a fiat, rectangular, preformed cavity which opened to the soil below by a broad gallery. Six eggs, six larvae, and three worker cocoons were also present, but a conscientious search in the immediate vicinity failed to reveal other adults. Later, a complete colony, undoubtedly independent of the first, was discovered nesting several hundred yards away in a rotting branch, of the same dimensions as the first and also buried in leaf litter between the buttresses of a large tree. This colony consisted of ten workers, a dealate queen, ten eggs, twenty larvae of various sizes, and eight cocoons. It occupied a small cavity the diameter of a pencil and six inches long in the center of the branch.

A third collection of the species was made to the east of Pueblo Nuevo in what might best be described as "tropical evergreen,’’ forest (see Leopold, 1950). The soil was drier and rockier than in the rainforest and the trees formed a single, often-broken canopy with few lianas and epiphytes. The ant auna in general appeared to be little more than a depauperate extension o the rainforest fauna. A colony fragment of Belonopelta deletrix, consisting of three workers, four eggs, and several larvae, occupied a pencil-width cavity in a very rotten, crumbling tree branch three to our inches in diameter lying on the ground and partly covered by rather dry leaf litter. The surface soil and leaf litter in the immediate vicinity were collected in bags, sorted through manually, and then processed in Berlese funnels, bat no more adults or brood could be found. 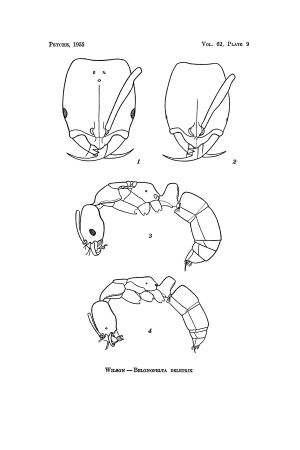 The rainforest colony and larger colony fragment were maintained in artificial nests during a month’s period for studies on food habits and behavior. In the field, a worker had been found on the undersurface of a limb near the rainforest colony carrying a dead or paralyzed campodeid in its mandibles. In captivity, other campodeids, as well as a single japygid, were quickly captured by the workers and fed to the larvae. Small geophilid centipedes and a single smll cicadellid were also accepted and eaten, but a larger lithobiid centipede was discarded after capture, and other larger centipedes were completely avoided. Termites of the genus Nasutitermes were generally avoided in the first weeks, at the most stung to death and then abandoned, but later, after a month’s confinement and transfer to the United States, the rainforest colony accepted workers of Reticulitermes. Beetle larvae and adults, moth larvae, millipedes, and isopods were avoided. The general impression received is that only a few kinds of small arthropods are readily accepted, and of these, the entotrophan families Campodeidae and Japygidae are the preferred prey. In the Pueblo Nuevo forests, campodeids are abundant (many were on the limb housing the rainforest colony), and they may well form the principal food supply. Honey was ignored by the workers, although available in the artificial nest for at least two weeks.

Despite the rather spectacular development of its mandibles, there does not appear to be anything really unusual about this species’ method of catching prey, although it is admitted that the workers were never seen in the act of hunting uninjured entotrophans, the presumed usual prey. When a brood of newly hatched geophilid centipedes was placed in the food chamber, the ants rushed them immediately, seized them with their mandibles, and shook them back and forth with a forward bobbing motion of the head. Only one individual was stung, in addition, before being carried back to the brood. The Belonopelta, when hunting or fighting intruders, do not open their mandibles more than is usual or other Ponerini. Also, the mandibles are not handled like traps as in other long-jawed groups such as the Odontomachini and Dacetini, nor does their strike have the stunning effect sometimes observed in these groups. My own interpretation is that their peculiar shape is a special adaptation for pinning entotrophans, which insects are very active and agile, and difficult for most ants to hold and sting.

My Belonopelta were generally very timid, in most instances fleeing frantically from arthropods not sought as prey, including the docile Nasutitermes workers. Their mandibles crossed one another at rest as shown in figures 1 and 2 and were never opened to threaten intruders. When the workers transported larvae, they cradled them between the concave masticatory borders and avoided using the needle-like apical teeth. The Belonopelta larvae were very active; when disturbed they thrashed violently back and forth in the manner of injured earthworms, but showed no capacity for directed locomotion. Insect prey were fed to them in typical ponerine fashion on their "laps", either entire or cut up into large pieces. The cicadellid mentioned above was placed entire across the laps of two large larvae lying side by side.

Head, excluding mandibles, longer than broad, broadest and with sides more convex in front of middle, posterior border feebly concave. Mandibles, when closed, crossing at middle, long, slender, and arcuate, the inner border at basal half with four strong, elongate teeth, the basal of which is the shortest, anterior edentate portion about as long as the dentate part, acute at tips. Clypeus strongly carinate at middle, triangularly projecting in front and terminating in a blunt spine. Antennal scapes almost attaining occipital corners, thickened at anterior half and with a distinctly concave outline on inner surface before the tip; funiculus stout, gradually thickened toward apex, first joint twice as long as broad, second a little longer than broad, joints 3-10 transverse, terminal joint conical, as long as the two preceding joints together. Eyes small and flat, situated at anterior sixth of sides of head. Thorax long, slender, and nearly straight in profile. Pronotum longer than broad and widest behind middle, sides convex. Mesonotum half as long as pronotum and broader than long. Base of epinotum flat, more than twice as long as broad and much longer than the declivity, from which it is separated by an obtuse angle; surface of declivity fiat, sides obtusely margined. Petiole from above subcampanulate, sides little convex, posterior border broadly concave; in profile higher than long, a little higher behind than in front, not narrowed above, the broadly convex anterior surface rounding into the similarly convex dorsum; posterior surface shallowly concave, roundly margined at sides.