Nests are made in stems or twigs of low shrubs or trees and the workers forage freely upon the plant. Small coccids are tended on the apical portions of twigs or flower stalks.

A member of the intrudens group. C. pygmaeus is separated from species closely related to brevisetosus by its relatively small eyes (OI < 50) and loose, very fine reticulate-rugose sculpturation upon the head and alitrunk, in which the meshes are widely separated. Some individuals of Cataulacus pygmaeus, with cephalic hairs gradually increased in thickness from base to apex, may be confused with Cataulacus brevisetosus. Notes on the separation of such forms from true brevisetosus are given under that species. (Bolton 1974)

Although pygmaeus is very widespread in Africa its distribution seems mostly confined to savannah regions or open wooded areas, but it is also known from forests (Bolton 1974). 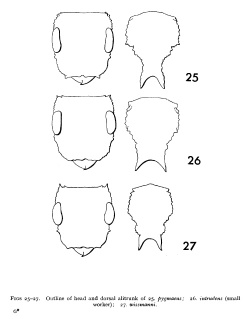 Occipital crest absent, the vertex rounding into the occiput. In some specimens the sculpturation of the dorsum of the head terminates quite suddenly behind, giving the appearance of a slight crest. Occipital corners denticulate and with a second denticle close to the corner on the occipital margin; these two denticles small, usually no larger than others upon the body. Sides of head behind eyes denticulate. Sides of pronotum strongly marginate, denticulate, the alitrunk sharply narrowed immediately behind the pronotum, the mesonotum notably less broad. Sides of alitrunk behind the pronotum more weakly marginate, denticulate. Propodeum armed with a pair of broad, dorsoventrally flattened spines. Dorsal alitrunk without sutures. Subpetiolar process variable, either with rounded angles or with the posteroventral angle acute and sometimes prominent. Subpostpetiolar process rather short, simple but distinct. First gastral tergite not marginate laterally.

Dorsum of head with a fine loose rugoreticulum, rarely with the longitudinal component predominating. Interspaces finely, densely and rather faintly reticulate-punctate, the surface somewhat shining. Pronotal dorsum with a rugoreticulum, coarser than that of the head, the meshes widely spaced, the interspaces reticulate-punctate and dully shining. On the mesonotum and propodeal dorsum there is a tendency for the cross-meshes of the reticulum to disappear, leaving a fine, widely spaced and irregular longitudinal rugation. First gastral tergite densely reticulate-punctate, with fine rugulae everywhere upon the disc of the sclerite, predominantly or wholly longitudinal in direction.

Dorsal surfaces of head, body and appendages with numerous short, stout, simple hairs. Rarely these hairs are increased in thickness from base to apex upon the cephalic dorsum.

As worker, with the usual modification of the alitrunk for flight. Denticulation of the sides of the head behind the eyes and often of the pronotal margins reduced, sometimes absent from the former. Mesoscutum with marked longitudinal rugation, with few or no cross-meshes.

Occipital crest absent, occipital corners denticulate and with a second denticle on the occipital margin close to the corners. Sides of head behind eyes denticulate. Preocular tooth reduced to a mere angle or absent. Pronotal margins irregular but not denticulate. Anterior arms of notauli well developed and cross-ribbed, the posterior arm absent or its track marked by a faint impression. Propodeal spines reduced to a pair of acute teeth. Dorsum of head predominantly reticulate-punctate with a few very fine longitudinal rugulae and a weak reticulum close to and behind the eyes. Pronotum similarly sculptured but with a very loose rugoreticulum everywhere, the meshes widely spaced. Mesoscutum quite strongly reticulate-punctate with a few longitudinal rugulae. Propodeal dorsum reticulate-rugose, the rugae here stronger than anywhere else upon the dorsal alitrunk or head. First gastral tergite finely reticulate or superficially reticulate-punctate, shining. Simple erect hairs present on all dorsal surfaces of the head and body.