Cataulacus tardus was found nesting in the canopy of a secondary-forest tree, in sampling conducted in tree crowns, in Gamba, Gabon. It was anecdotally reported to subordinate at tuna baits. C. tardus has been shown to exhibit directed movement while in freefall that allows workers that fall or purposely detach from a tree to glide back and regain a hold on the same tree trunk. This gliding behavior is shared with numerous members of the tribe Cephalotini, and other genera as well. (Yanoviak et al. 2005, 2007, 2008)

A member of the huberi group. Santschi notes that Cataulacus schoutedeni is close to Cataulacus tardus, but is smaller, the (propodeal) spines relatively longer, the sculpture more feeble'. Variations of this form are usual and may be universal amongst species of the huberi group, and the only real difference separating the types of the two forms in the present species (apart from obvious size differences) is the presence of an angle separating the vertex from the occiput in tardus, absent from schoutedeni. As has been noted the occurrence of this angle is restricted to large workers of the species and no grounds remain for maintaining the two names as separate species. (Bolton 1974)

Known from Democratic Republic of Congo, Congo, Gabon, and Guinea. 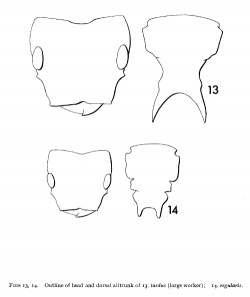 Occipital margin usually without crest separating vertex from occiput, the two surfaces confluent; but in some large workers an acute angle separates the two surfaces. Occipital comers without teeth or denticles, rounded; the sides of the head behind the eyes often irregular but never denticulate. Margins of alitrunk not denticulate; the pronotum strongly marginate, the remainder not marginate, with the dorsum rounding evenly into the sides. Pronotal margination expanded laterally, subrectangular in shape, the edges straight or irregular and strongly converging posteriorly to the mesonotal surface. Promesonotal suture absent or represented in the largest workers by a very faint and extremely shallow arcuate impression. Propodeum with a pair of long, strong, acute spines, as long as or longer than the dorsal length of the petiole. First gastral tergite not marginate.

Dorsum of head extremely finely, densely and faintly reticulate-punctate, with a loose, very fine, scattered rugoreticulum. In some specimens the rugulation is effaced or nearly so over some areas of the cephalic dorsum. Dorsal alitrunk similarly sculptured but with the rugulae tending to assume a longitudinal direction. First gastral tergite predominantly or totally finely reticulate-punctate, but in some specimens a few very faint rugulae are visible.

Dorsal surfaces of head, alitrunk and gaster without hairs. Margins of head behind eyes and margins of alitrunk without hairs, or the former with one or two minute hairs which, however, do not project freely beyond the margin.