This species is unusual in that it has been studied both in the field and laboratory (Creighton and Gregg 1954). It nests in cavities in trees and is often found in live-oaks.

A member of the texanus clade characterised, in the worker, by the irregular rugosities on the ventral part of the head and by the anterior face of the petiole without denticles, and, in the soldier and gyne, by the contiguous foveae on the disc. 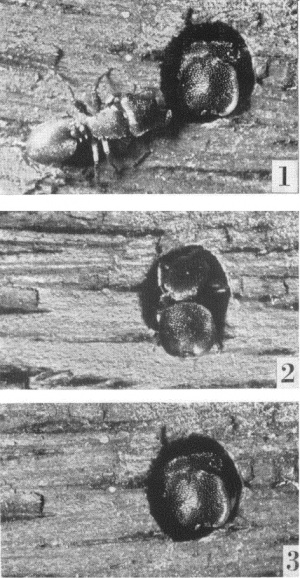 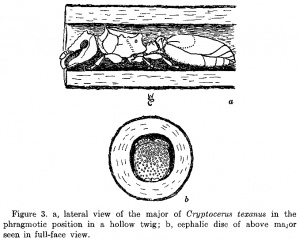 Creighton and Gregg (1954) - Colonies have been found most often in live-oaks (Quercus virginana) but also occur in Q. fusiformis, Q. stellata, Zygia flexicaulis, Brayodendron texanum, Xanthoxylum clava-herculis, Celtis pallida and Prosopis juliflora. Colony size, based on 16 nests, varies from 31-232 individuals (workers and queens) and may have multiple queens.

When the guarding major has assumed the phragmotic position the lower rim of the head usually projects slightly beyond the edge of the nest entrance. The antennae are held at either side of the cephalic disc and are clearly visible rom the outside. The returning minor may or may not touch the antennae of the guard, although it usually does so. Thereafter the guard crouches down. This brings the anterior rim of the head below the level of the floor of the passage or, if the guard stands completely inside the passage, the front of the head is raised as the guard crouches. The dorsum of the guard’s thorax is now no longer close to the roof of the passage and the minor can, if it is sufficiently active, wriggle between the dorsum of the thorax and the roof of the passage. This action is seldom completed without considerable struggle on the part of the entering minor and at times the major will cease to crouch before the minor has gone through and pin the minor between its thoracic dorsum and the roof of the passage. The senior author has seen minors thus trapped who, perforce, remained in this awkward position for several minutes until the major would crouch again and release them. If the passageways are made large enough to accomodate two majors simultaneously, they ordinarily assume a position where they are back to back. Under such circumstances the two opposed cephalic discs form a V-shaped area. The bottom of this V is open but the space behind it is closed by the closely approximated thoracic dorsi of the two guards. When minors are admitted to the nest both majors crouch and the entering worker struggles through the narrow space between the thoraces of the guards. It seems scarcely necessary to state that there is no part of this behavior which at all resembles that of the Colobopsis major, which must back away from the nest entrance to admit the returning minor.

To judge from the captive colonies these ants are very sluggish in their nests. They often pack themselves together in a nest chamber or passage and remain immobile for hours. If disturbed both majors and minors may open their mandibles and keep them .open. This is a preliminary to an attack on any intruder. When living termites were placed in the captive nests they were immediately attacked by both majors and minors. The attack was made with the open jaws of the attackers held close to the floor of the nest. As a result the termites, suffered very little damage to any parts except their legs. These were rapidly cut off but once the termites had been immobilized no further attention was paid to them.

Brood is tended by both minors and majors who, despite their clumsy heads, handle the eggs and young larvae with surprising gentleness.

An additional study (Creighton 1963) reported on their feeding on pollen and plant nectaries.

Posterior border of head weakly emarginate, posterolateral corners not excised, dorsal surface largely convex except toward the sides, anterior border with a distinct emargination exposing much of the mandibles. Promesonotal suture lacking or very poorly indicated, mesoepinotal suture present but not strongly developed. Thorax marginate on each side, bearing spines arranged in the following order: Two on pronotum, one on mesonotum, and two on epinotum (the anterior one lying near the mesoepinotal suture and sometimes feebly developed). Petiolar and postpetiolar nodes and also their spines similar to those of the soldier but smaller, the postpetiolar spines usually less reflexed apically. Gaster as in soldier.

Pitlike impressions on head and thorax smaller and more irregular than in soldier, the sculpturing on the thorax especially with a reticulate-rugose trend. Sculpture on gaster similar to soldier's.

Pilosity similar to that of the soldier in nature and arrangement.

Black; mandibles, frontal carinae, antennae, apex of each femur, tibiae, and all tarsal segments except the basitarsal reddish brown. Frontal carinae and a basal spot on each side of gaster whitish yellow. The spot on each side near the posterior border of the first gastral segment, which is sometimes present in the soldier, apparently missing in the worker.

Cephalic disc proportionately broader than in Cephalotes rohweri, approximately as broad as long, with posterior border usually weakly emarginate, occasionally straight, posterolateral corners oblique, sides less subparallel and front rounded, bearing a distinct median emargination which exposes much of the mandibles. A convexity near the center of the disc. Border weakly or not erenulate. Pronotum as broad as head. Transverse pronotal crest well developed, sharp but interrupted in the middle, somewhat crenate; lateral border of pronotum usually spineless, except for a very feeble indication of an anterolateral spine. Promesonotal and mesoepinotal sutures weakly to moderately well indicated, the mesoepinotal suture usually the more distinct of the two. Mesonotum projecting laterally as a short, angular lobe. Epinotum concave posteriorly, each lateral margin with three lobes, if one includes the anterolateral and posterolateral corners, the median lobe larger than the other two. Each side of petiolar and postpetiolar nodes with a short spine, that on the postpetiolar node usually larger and more strongly reflexed posteriorly. Gaster oblong, with a very distinct basal emargination, and with weakly developed anterolateral margins.

Pitlike impressions on the head and thorax much smaller, finer and apparently less circular than in rohweri. Gaster very finely granulate, but lacking the rugulae of rohweri.

Smaller than rohweri. Impressions on head and thorax smaller, finer and less circular. Mandibles, frontal carinae, antennae, tibiae, and all of tarsal segments except the basitarsal, reddish brown; basal spot on each side of gaster whitish yellow (body of rohweri entirely black). Silvery, appressed hairs conspicuous over the body and appendages, these lacking in rohweri. Anterolateral corners of pronotum not so acute. Epinotum concave posteriorly (straight in rohweri). Postpetiolar node more compressed anteroposteriorly and with much larger and more prominent spines. Differing from soldier and worker (of texanus) in having sparse, short, suberect to erect hairs on thorax, postpetiole, and gaster.

Description based on a wingless female.

Eye convex, longer than broad. Posterior border of head rounded, with the ocelli borne on summit. Antenna 13-segmented, the segments enlarging toward the apex but not forming a definite club; scape short, first funicular segment annular. Mesonotum with well-developed Mayrian furrows. Epinotum with coarse longitudinal rugulae. Venation similar to that of rohweri female. Side of petiolar and postpetiolar node each with a small tubercle; the tubercles not very noticeable under the low power of binocular. Gaster from above, subelliptical, broadest at base. Pronotum and mesonotum especially, with coarse impressions in addition to other sculpturing.