This species has been found nesting in small dead branches of living Acacia trees in Jaragua National Park (Dominican Republic) and is relatively common within the park. Foragers have been observed on vegetation in dry forest habitats at numerous locations across a range of elevations. 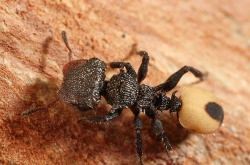 A member of the hamulus clade. The closest relative of unimaculatus is Cephalotes vinosus. Both share the regular body sculpture, the gaster differing in colour from the rest of the body and the pilosity partially hiding the sculpture. The yellow coloration on the gaster clearly separates C. unimaculatus from C. vinosus. (de Andrade and Baroni Urbani 1999)

The Salticid spider Descanso formosus is a mimic of this ant.

From de Andrade and Baroni Urbani (1999): Head shape as in the other species of the group. Eyes flat or convex.

Petiole ca. 1 /3 broader than long, its anterior face truncate and marginate dorsally by a crenulate carina interrupted in the middle; its sides converging posteriorly and with a pointed tooth medially, sometimes reduced to a minute denticles in some specimens. Postpetiole as broad as or broader and longer than the petiole; postpetiolar spines broad and variably pointed, inserted anteriorly and curved backwards.

Gaster and legs as in hamulus.

Legs as in the other species of the group. Some specimens with transversal rugosities on theanterior and posterior faces of the femora.

Pilosity. As in hamulus.

From de Andrade and Baroni Urbani (1999): (previously undescribed). - Head (eyes included, mandibles excluded) about 1 /3 broader than long. Vertcxal margin incompletely carinate and straight. Vertexal angles obtuse, diverging towards the posterior border of the eyes. Vertex convex. Ocelli protuberant. Eyes convex. Frontal carinae converging anteriorly, diverging backwards and not reaching the posterior border of the eyes. Clypeus convex, its posterior half higher than the anterior one, almost truncate. Anterior border of the clypeus bidentate, concave medially and laterally. Mandibles without lateral carina. Scapes thick, twice as long as the first funicular joint; remaining funicular joints thickening from the base to the apex.

Gaster almost as broad as the mesosoma.

Genitalia and subgenital plate as in Fig. 34.

Wings as in auricomus.

Sculpture. Head and mesosoma with minute reticulation; this sculpture is superimposed by irregular foveae and irregular rugosities, the rugosities transversal around the eyes, longitudinal on the frons and on the scutellum and absent on the mesonotum; the foveae more regular on the mesonotum. Declivous face of the propodeum and pleurae superficially reticulate, shining and with longitudinal, thick rugosities on the pro- and mesopleurae, irregular on the declivous face of the propodeum and on the metapleurae. Petiole and postpetiole reticulate and with irregular, longitudinal rugosities, more concentric on the dorsum of the postpetiole. First gastral tergite strongly reticulate. Remaining tergites and sternites superficially reticulate. Legs punctate, the punctures more impressed and denser on the tibiae.

Pilosity. As in hamulus.

Note: the male measurement are based on the sole two specimens available, an adult and a pupa. This fact should account for the differences between them. The lowest figures, however, refer always to the pupa.

From de Andrade and Baroni Urbani (1999): Holotype worker labelled "Braz., Cryptocerus unimaculatus Smith." in the The Natural History Museum (KEMPF, 1951:151), examined. C. unimaculatus has been described from Brazil, a provenance confirmed by the label of the holotype which must nonetheless be considered as certainly wrong.