Eguchi (2001a) - This species is easily recognised among Indo-Chinese and Indo-Malayan congeners by a combination of the following characteristics: promesonotum of the minor armed with a pair of blunt spines; frons of the major irregularly reticulate; hypostoma of the major bearing a stout (rarely poorly developed) median process; frontal carina of the major horizontal, and extensively overhanging antennal scrobe. The close relationship between P. aristotelis and Pheidole hortensis and its possible relatives is inferred by their exceptional characteristics, i.e., distinctly reticulate ventral faces of midcoxa and hindcoxa in the major.

Two relatively distinct colour forms are observed in both the subcastes; the “brown form” and “dark form” are more or less recognisable sympatrically in Poring and Gunong Rara, Sabah. All of the examined colonies from Halimun CW. Java), and also one colony collected from Lombok, are of the “dark form.” Type series of this species seems to belong to the “brown form.” However, I am at present unsuccessful in finding any other character correlated with this color variation. Therefore, I refrain from concluding their status, and tentatively treat them to be conspecific. 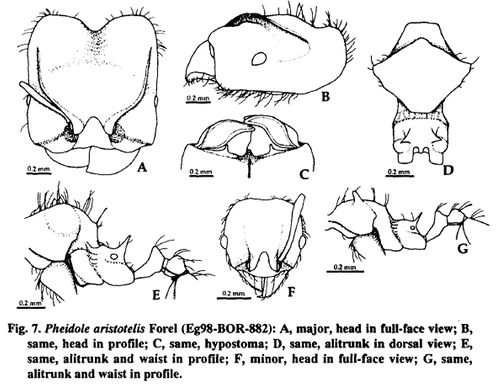 Dorsal and lateral faces of head including clypeus punctured, or weakly reticulate with punctured enclosures; alitrunk punctured; lateral face of petiolar pedicel punctured very weakly and shining; dorsum of petiole, and postpetiole and gaster smooth and shining. Body yellowish-brown to brown, or dark brown with lighter mandible; flagella and legs lighter than alitrunk.

Eguchi (2001b) - Major, minor and male; Sarawak, Borneo. Seven syntypes (3 majors, 3 minors and 1 male, Musee d'Histoire Naturelle Genève) were examined, of which one major is designated as the lectotype.