The type collection, the only specimens of Solenopsis longicephala, was made from a nest found under a rock. This species is dimorphic and possesses a set of unusual characters for the genus that are likely convergent with traits of other Myrmicinae genera, such as Carebara.

Cuezzo & Fernández (2015) - This species can be differentiated from all other Solenopsis by the combination of the following traits: dimorphic ants; major worker with long and abundant hairs on the dorsal face of mesosoma and gaster; head in major and minor workers extremely elongated; eye reduced to 1-5 ommatidia; and palpal formula 2-1. According to Pacheco and Mackay (2013) most species of thief ants are monomorphic or weakly polymorphic; only five species are strongly dimorphic (Solenopsis iheringi; Solenopsis johnsoni; Solenopsis thoracica, Solenopsis tetracantha, and Solenopsis vinsoni) and none of the polymorphic species have the particular combination of character states mentioned above. All of the species described as dimorphic belong to the fugax complex except S. iheringi, which belongs to the wasmannii complex.

Solenopsis longicephala is a member of the pygmaea species complex of Pacheco and Mackay (2013). This complex comprises ants with elongated heads and strongly punctate integuments, often possessing a bicarinate clypeus; 4-5 well-developed clypeal teeth, with different degrees of development but always present, and extremely small minor workers with poorly developed eyes. Also, the notopropodeal suture is only slightly impressed and the postpetiole nearly circular. All the characters above mentioned are present in S. longicephala.

Some members of the Solenopsis wasmannii complex also have elongated heads, workers that are extremely small (total length up to 1.45 mm), and the head surface with very coarse punctures. However, those species possess a very particular form of the clypeal carinae different from that in S. longicephala Also, the compound eyes of their major workers have more ommatidia (10 or more) than those of S. longicephala (4 - 7).

The major workers of S. longicephala are similar to those of Solenopsis wasmannii, but Solenopsis longicephala can be recognized by the extremely elongated head, whereas the head of S. wasmannii is only slightly longer than broad.

Known only from Tucuman Pr., Argentina.

Cuezzo & Fernández (2015) - Most myrmicines possess heads not longer or slightly longer than wide. Some species of this subfamily, however, have majors with elongated heads. This trait is known in Adlerzia, Carebara, and some Pheidole (especially in the aberrans groups and Pheidole dispar, formerly in Machomyrma). Because these are distantly related to Solenopsis (Ward et al., 2015), the presence of an elongated head in Solenopsis longicephala is here interpreted as a convergent trait. The biological functions of elongated heads are obscure because little is known of the biology of the mentioned ants. Most Carebara appear to be soil-inhabiting ants, perhaps living near or inside the nests of other ants or termites, with supposedly lestobiotic habits. However, some Pheidole species in the aberrans group appear to be surface foragers and no data are available for Pheidole dispar and Adlerzia. Other subterranean myrmicines lack elongated heads, e.g., the “majors” of Tranopelta. Longer heads and cylindrical bodies could be associated with hard substrates or narrow passages in the soil or in twigs or may be associated with a specialization for defense in the soldier caste. 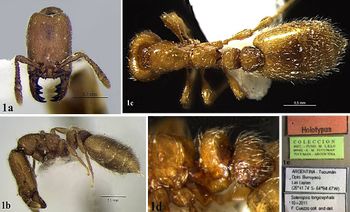 Body smooth and shiny, except for the gena, which has fine parallel grooves, and for the side of the propodeum, which is covered by fine transverse striation. Cephalic dorsum with scattered punctures. Entire body covered by erect to subdecumbent light yellow hairs, more abundant on all gastral tergal plates. Body and appendages light brown.