An arboreal nester, based on one of the few known specimens reported as being from canopy fogging, nothing else is known about the biology of Cataulacus praetextus.

A member of the taprobanae group. Cataulacus praetextus is distinguished from its immediate congeners by the form of sculpturation, great reduction of hairs, especially on the legs, the laterally marginate first gastral tergite and the projection of the occipital crest. It appears to be closest related to Cataulacus reticulatus and Cataulacus catuvolcus. The male is distinguished by the rather odd bands of long thick hairs on each visible gastral tergite behind the first. (Bolton 1974)

Known from Indonesia (Sumatra) and Malaysia (Sarawak, Borneo) with the type collected from an unspecified locale in Borneo. 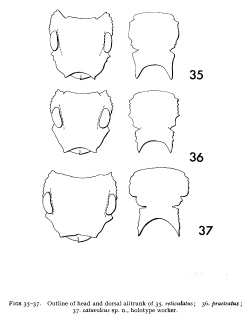 Occipital crest complete, the median portion raised into a low, projecting ridge in full-face view; entirety of crest without denticles. Sides of head behind eyes denticulate, sometimes not very distinctly so, the occipital corners with a low, broad, triangular tooth. Sides of pronotum with a rectangular shallow expansion, the margins of which have one or two feeble teeth or crenulations anteriorly. Sides of mesonotum roughly triangular in dorsal view, with a distinct U- or V-shaped notch or impression separating them from the propodeum. Propodeum behind this notch with a short free anterior face. Sides of propodeum marginate, continuous with the sides of the spines, the margins with three to five denticles. First gastral tergite marginate laterally throughout its length, the margination most distinct basally.

Dorsal surfaces of head and alitrunk with a fine rugoreticulum with the interspaces finely and densely reticulate-punctate. The sculpturation has approximately the same intensity on all parts of the dorsal alitrunk. Dorsal surfaces of pedicel similarly but more loosely sculptured; the first gastral tergite finely and very densely reticulate-punctate with numerous short rugulae, the majority of which are longitudinal.

Dorsal surfaces of head, alitrunk and first gastral tergite without hairs. Hairs are, however, present on the mandibles and a row of short, flattened hairs adorns the margin of each frontal carina. Sides of head behind eyes with a row of very short, flattened hairs which project beyond the lateral margins in full-face view. Lateral margins of alitrunk with a few similar hairs. Dorsal surfaces of femora and tibiae without hairs except for one or two which may be present at the extreme apices of the latter.

Similar to worker, the median projecting portion of the occipital crest distinct. Denticulation of sides of head behind eyes less well developed; the expansions of the sides of the pronotum much reduced, with a small but distinct triangular tooth at the beginning of the lateral margination on each side. Propodeal spines smaller than in worker, the sides of the first gastral tergite not marginate. Sculpturation of head, pronotal dorsum, propodeum, pedicel and first gastral tergite as worker but the scutum and scutellum longitudinally rugose, the spaces between the rugae finely reticulate-punctate. Hairs distributed as in worker but one or two erect hairs may be present on the femora.

Occipital crest complete, unarmed, the median portion raised and projecting as in the worker. Sides of head behind eyes not denticulate, usually feebly sinuate. Occipital corners in the form of projecting, broad, triangular angles. Frontal groove distinct, not reaching the median ocellus. Sides of pronotum not expanded, without denticles. Anterior arms of notauli distinct at least anteriorly and with cross-ribs, the posterior arm indistinct or absent. Parapsidal furrows present. Propodeal spines broad basally, rapidly converging to an acute apex. First gastral tergite not marginate. Parameres in side view with a strong, thick brush of hairs ventrally.

Sculpturation somewhat variable. Head usually reticulate-punctate everywhere with a superimposed fine rugoreticulum posteriorly on the dorsum and fine, more definitely longitudinally directed rugulae anteriorly, the change in sculpturation taking place more or less at the level of the median ocellus. On the most finely sculptured individuals the rugulae are virtually absent from the anterior half of the head. Dorsum of alitrunk reticulate-punctate with sparse longitudinal rugulation on the mesonotal sclerites and a fine rugoreticulum upon the propodeum. Gaster very finely reticulate-punctate and dully shining. Erect hairs sparse everywhere but the second to fifth gastral tergites inclusive with a transverse row of many long, thick, blunt hairs, entirely absent from the first tergite.