Longino (2013): Deyrup et al. (1997) reviewed the status of E. floridana in Florida and described the male. The species was moderately abundant in hardwood hammocks throughout peninsular Florida but did not extend into the western panhandle. They speculated that the species could be exotic in Florida, and referred to a personal communication from W. L. Brown that the species occurred in Mexico. I have seen no material to verify the occurrence in Mexico, but J. Wetterer collected specimens on Mona Island, Puerto Rico, and D. Lubertazzi collected specimens along a roadside in the Dominican Republic. The biogeographic history of this species, in Florida and elsewhere, remains enigmatic.

Deyrup et al. (1997): Brown and Kempf (1960) suggest that E. floridana could be a recent introduction from the Neotropics. There is additional circumstantial evidence that supports this suggestion. Expanding ranges are typical of exotic species; E. floridana is now easily obtained in Alachua and Putnam counties, where Van Pelt (1958) sampled extensively for dacetine ants without finding E. floridana. Eurhopalothrix floridana has not been found in the West Indies (changed since this was stated here in 1998, see Longino 2013), the source of almost all tropical ants that have, we assume, dispersed naturally to Florida. It is unlikely to be a native from the forests of the southern Appalachians, because such species usually have a large range to the north and west of Florida. E. floridana occurs in Mexico (W. L. Brown, Jr., 1985, pers. comm.), so there is a possible source of introduction. There are species of insects, including ants, that occur in southwestern North America, with a disjunct population or closely related congeners in Florida, but these are species of open, desert or savannah habitats, not woodlands (Deyrup 1990).

On the other hand, it could be native to Florida. The oldest record is a damaged specimen found recently by David Smith of the U. S. National Museum of Natural History. This specimen is from Key West (once a major commercial port), dated 1887, and is in the Pergande collection. A record of this antiquity coming from a less settled part of Florida might suggest that E. floridana is a native species, but in tropical Florida a great amount of entrepreneurial horticulture occurred well before 1887. Henry Perrine, for example, was in a good position in the 1830's to be an unintentional purveyor of cryptobiotic ants to the Miami area. Perrine displayed a missionary zeal in the importation of plants from southern Mexico, many in boxes or tubs of soil. Marjory Douglas (1978) cites a report of "more than 100 boxes of plants shipped from the Yucatan" by Perrine outside one building in the Miami area. Eurhopalothrix floridana is a cryptic species that could have escaped being, noticed by some collectors; it does not show any association with highly disturbed habitats. Its ability to live in xeric woodlands might have allowed it to move to Florida from Mexico along with other upland species at the end of the Pliocene or in the early Pleistocene. We conclude that this species is probably introduced into Florida, but would like to see better documentation of the species in Mexico, especially southern Mexico.

Deyrup et al. (1997) - Eurhopalothrix floridana occurs throughout peninsular Florida, based on about 130 collections from over 70 sites. Although we sampled leaf litter and rotten wood from all over Florida, we made no effort to sample evenly, and the distribution pattern reflects biases based on convenience and access. The total sampling effort, however, involved many thousands of Tulgren funnel extractions, collected in all regions of the stale. We collected, for example, hundreds of samples from the western panhandle, without finding any E. floridana. The pattern of records reflects the distribution of woodlands in peninsular Florida, including the dry tropical hammocks of the Florida Keys, the Atlantic coastal ridge hammocks, the scrub forests and ecotonal hardwood forests of the southern and central ridges, and the mesic and xeric forests of the northern peninsula. 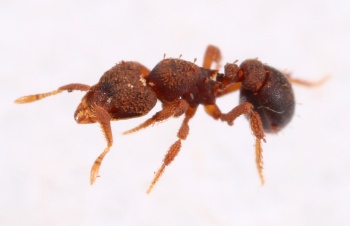 In a study of E. floridana using standardized, unsifted, approximately 2-liter samples of litter, we found E. floridana in 65 samples on 32 occasions. The 32 habitat records include: 8 from xeric forest (old growth sand pine scrub, sandhill invaded by large oaks), 11 from mesic forest (usually mixed oaks and pines), 5 from wet forest (mixed pine and hardwoods, usually induding oaks and magnolia); and 8 from coastal tropical hardwood forest. This is apparently a woodland species that is not particular about drainage.

The 2-liter litter samples used in this analysis were indexed by site and date, with an ant species list for each sample. This allows us to say that, out of 346 samples collected at a site and date where E. floridana was found, 65 (19%) contained an E. floridana. At a number of sites less than one out of 10 samples had E. floridana, so it is evident that in many cases at least 5, and often more, samples must be extracted to demonstrate the presence on this species at a particular site. This need for large numbers of samples to show presence or absence of a species is a common problem in surveys of litter ants; many species are much rarer.

Longino (2013) - Although the queen has never been formally reported, images of a queen on AntWeb (CASENT0103902, from Florida) show it to have the typical similarities to the worker.

Deyrup et al. (1997) - The male generally resembles a male dacetine in its dense, reticulate sculpture, the facial projection from which the antennae emerge, reduced venation, and long petiole. It is distinguished from Florida dacetines by the following features: 1.) The post petiole is twice as wide as the petiole, with a strongly concave anterior border and a conspicuous spatulate hair on each side. 2.) The first submarginal cell is clearly developed. 3.) The antennal scape has a strong bristle on the proximal corner of the large bulge on the inner side. This may be a character found throughout the genus (Brown and Kempf 1960) 4.) The size is relatively large. Total length: 2.02-2.15 mm. Length of forewing: 2.32-2.45 mm.