Xu (2012) - At first glance, the new genus is somewhat similar to Lophomyrmex Emery of the tribe Pheidolini by the following characters: 11-segmented antennae, long propodeal spines, large propodeal spiracles, and long petiolar peduncle. However, the genus obviously belongs to the tribe Stenammini by the following characters: median portion of clypeus longitudinally bicarinate, anterior clypeal margin nearly straight in the middle portion; masticatory margins of mandibles with only 6 teeth; antennae short, apices of the scapes failed to reach occipital corners, the third segment of antennal club counting from apex distinctly reduced in volume and much shorter than the second one; pronotum without teeth, prominences, or lateral margins; head and alitrunk strongly sculptured.

Known only from the Yunnan Province, China. 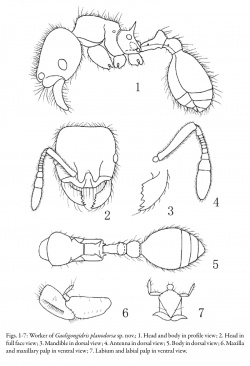 Monomorphic terrestrial myrmicine ants with the following combination of characters.

Mandible triangular, with 6 sharp teeth which decrease in size from apex to base.

Anterior clypeal margin with a row of long setae, but lacking an isolated median seta.

Frontal lobes as broad as the posterior portion of clypeus which is inserted between them.

Antennae 11-segmented; scapes short, apices failed to reach occipital corners; antennal clubs 3-segmented, the third segment of the club counting from apex reduced in volume and much shorter than the second one.

Eyes moderately large, drawn out anteroventrally, located before the midpoints of lateral sides of the head.

Promesonotum forming a high plateau, without teeth or prominences.

Propodeum low, with a pair of long slender spines.

Propodeal spiracles large and circular, well before the declivity margin and high up on the sides.

Metapleural gland bullae large and close to the propodeal spiracles.

Petiole with long anterior peduncle, the spiracles located about at the midlength of the peduncle, subpetiolar process absent.

The new genus is named after the type locality “Gaoligong” plus the common suffix “-idris”.