Prefers nesting in meadows with dryer soils. Its soil nests can be difficult to find as the nest entrance (and the only indication there is a nest) is an small unmarked hole.

Radchenko and Elmes (2010) - This species typifies the rugulosa complex of the scabrinodis species group (see also Radchenko and Elmes 2004). It is one of the smallest European Myrmica species. Populations do not appear to vary morphologically to any great extent. M. rugulosa most resembles Myrmica constricta but differs from it by the complete absence of a longitudinal ridge at the base of scape. On the other hand, it can be confused with Myrmica gallienii (especially small specimens of that species), but it differs from the latter by its somewhat more angularly curved scape and much more developed reticulated sculpture on the head dorsum. Moreover, the other castes differ: queens of M. rugulosa are much smaller and the length of the second funicular segment of males is subequal to the third whereas in M. gallienii males it is > l.5 times longer than the third one.

Europe (absent from British Isles and Iberian Peninsula), Caucasus. All old records of this species east of Ural Mts. belong to M. gallienii.

Radchenko and Elmes (2010) - M. rugulosa is an oligotopic thermophilous species that is mainly found in dry meadows, particularly meadows with a very sandy soil. In the more continental parts of its range it is also found in suitable mountain meadows, open scrubby woodland, forest clearings, glades and edges providing its nests sites are open to direct sunlight. Generally it avoids sites with heavy, damp soils. Despite its preference for warm (often hot) microhabitats it is a “northern” species and does not live in steppes and dry Mediterranean biotopes. It is quite tolerant of anthropogenic pressure and is often found inhabiting pastures, gardens and orchards in rural areas, and lawns, parks and roadside edges in urban areas. We have observed a very large population in Jutland, Denmark that appeared to be one super-colony occupying the entire floor area of a large abandoned sand quarry.

Despite its relative abundance in North and Central Europe there has been relatively little ecological study of M. rugulosa. It appears that in the habitats where it normally lives its main competitor is Lasius niger, with which it interacts by passive behavior and foraging at different times (e.g. Czechowski 1979; De Vroey 1980a; Galle et al. 1998). Individual nests may contain up to several thousands of workers and are nearly always polygynous, we have data from only four nests excavated in Jutland (see above), that had a mean size of 1200 workers and 19 queens. Nests are built in the soil and usually there are no above-ground indications (spoil heaps, solaria etc.) of its presence other than small barely visible entrance holes. Consequently it can be difficult to find the nests of M. rugulosa, a good tip is to search after heavy rainfall when often one can see freshly excavated sand on the soil surface. 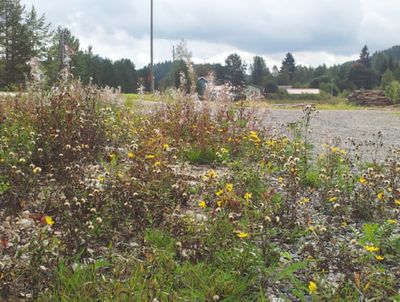 One of the most studied aspects of M. rugulosa has been the chemical structure of its recruitment and trail pheromones (Attygalle et al. 1983; Cammaerts, 1980a; Cammaerts and Cammaerts 1981; Cammaerts et al. 1982). Otherwise, it has been reported to be a host to Myrmica karavajevi in Sweden (Douwes 1977). Nuptial flights have been recorded in August and September.

Collingwood (1979) - This is a small slender species, in Scandinavia found locally nesting in lowland sandy heath or open pasture frequently near the coast, but more generally distributed in Europe ascending to 1000 m in the Central Pyrenees. The nests are deep in the ground with circular crater like openings to the outside. The species is polygynous and a single colony may contain many thousands of workers. These tend to forage in files unlike most other Myrmica species which forage singly.

Ødegaard et al. (2015) - A total of eleven colonies where found (September 2014) in a dry, disturbed meadow along the roadside. The colonies were placed in rather packed, sandy soil mixed with gravel, 0–50 cm below the ground (Figure 2). The colonies were very large compared to other Myrmica Latreille, 1804 species and consisted of several thousand individuals. A few alate males and queens were found together with the workers in six of the colonies.

Association with other Organisms

Radchenko and Elmes (2010) - name derived from the diminutive of the Latin word rugosus = wrinkle or full of wrinkles, to describe its fine, rugulose sculpture.