Longino (1997) observes, as I have, that fiorii “inhabits mature wet forest understory. It makes hemispherical carton nests under individual leaves of palms, aroids, and other large-leaved plants. The nests are on the order of 10 cm across, and usually at head height or lower. Colonies appear to be monogynous and with a single nest.” Longino notes also that fiorii has varied greatly in abundance at La Selva and Peñas Blancas from one season or year to the next, for unknown reasons. At Peñas Blancas he observed a nest being raided by a colony of the army-ant-like ponerine genus Simopelta. (Wilson 2003) 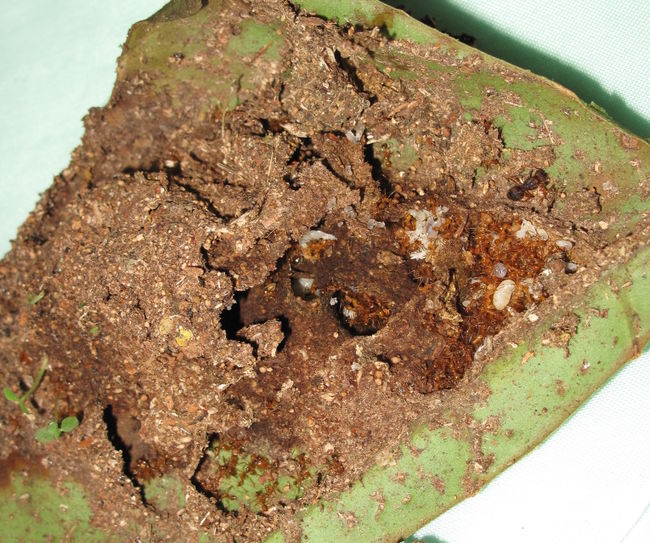 Partly opened carton nest of P. fiorii, showing inhabited chambers with workers, soldiers and brood. The single dealate queen is seen on upper right. Many seeds (all the same size and shape) are scattered throughout. From El Ceibo, Costa Rica. Photo by Christian Peeters

From Wilson (2003): A medium-sized member of the fallax group with extremely long propodeal spines and scapes in both castes.

Major: occiput, lateral sections of the head, and posterior strip of pronotum rugoreticulate.

Minor: dorsal surface of head and almost all of mesosoma foveolate to some degree and opaque to subopaque, although the degree of foveolation is variable and parts of the head and promesonotum are often nearly smooth and shiny. 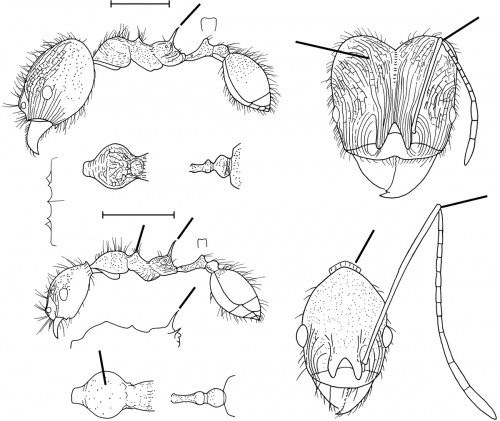