Stefan Cover (unpublished field notes), who has collected obtusospinosa many times in southern Arizona, has found it consistently in woodland, variously composed of different combinations of pine, oak, and juniper. It typically nests under rocks, although Cover found one colony beneath a cow pat and another 2.5 m from the ground in the dead branch of a standing oak tree (Quercus arizonica). Creighton (1958) reports that colonies are much smaller than those of the now junior synonym Pheidole vasliti hirtula, and that in southern Arizona nuptial flights occur in early July. Creighton (1958, under the name P. vasliti hirtula) reports that mature colonies are very large, with numerous majors, and occasionally dominate the immediate surrounding area to the exclusion of other ant species. Winged reproductives are found in the nests from April to at least September, and nuptial flights evidently occur in late August into early September. According to Barry Pullen, the size variation of the workers is continuous, but with sharp modes marking the minor, major, and supermajor castes. (Wilson 2003)

This is a polymorphic species, which has the usual minors, intermediate sized workers (which look like major workers of other species) and very large major workers. The scape is flattened at the base, but the flattened area is not as wide as the width of the scape near the apex. It extends about 2/3 the length of the head in the largest workers, but may extend nearly to the posterior lateral lobes in the smallest majors. The entire dorsal surface of the head is sculptured, with granulose sculpture on the front faces of the posterior lateral lobes. The entire dorsum of the head is dull. The mesonotum projects above the level of the pronotum and propodeum. The dorsal surface of the gaster is finely punctate. (Mackay and Mackay 2002)

Known from the mountains of southern Arizona at 300–1900 m, New Mexico (very common in Clanton Draw in the Coronado National Forest, Hidalgo Co.), and from Nayarit to Nuevo Leon in Mexico. (Wilson 2003)

According to Creighton (1958), who studied the junior synonym P. vasliti hirtula closely, the species occurs between 1070 and 2310 m, with most colonies concentrated at 1500–2100 m, from northern Chihuahua southward through Coahuila, Nuevo León, San Luis Potosí and Zacatecas to Hidalgo, Querétaro, and Jalisco. Barry E. Pullen (personal communication) reports the species as common in the suburbs of Mexico City. (Wilson 2003) 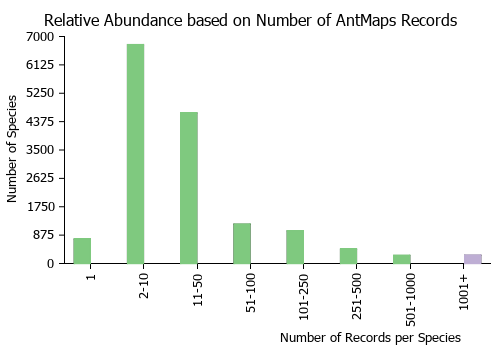 Mackay and Mackay (2002) - This species nests under stones, often the largest stones in an area, or nests in the soil with several separate entrances. It is common in sandy soils, including dunes, but also occurs in areas of rocky loam. Brood is found in nests in March. They are preyed on by Neivamyrmex leonardi, and make no attempt to defend the nest and only escape and rescue brood. Foragers are both diurnal and nocturnal, and visit extrafloral nectaries.

Huang (2010) reported how supermajors of this species served an important role in effectively repelling a Neivamyrmex texanus raid. The observed P. obtusospinosa colony nested at the base of a living oak tree and had a triangular-shaped nest entrance (base: ~ 12mm height: ~ 9mm) partially bordered by hard tree bark and the softer soil ground surface. The nest was in an oak, sycamore, and juniper forest in Gardner Canyon in Tucson, Arizona (31º42.56’N and 110º42.58’W; Elevation: 1618 meters). When a raid occurred in the early afternoon, the super majors effectively blocked the nest entrance using their heads. "After failing to penetrate the nest entrance of the P. obtusospinosa colony, some of the army ants turned away and swarmed around the base of the oak tree, possibly trying to find another entrance into the colony. As the number of army ants at the nest entrance dwindled, the P. obtusospinosa super majors broke their head-blockade formation and stormed out of the nest. One group of P. obtusospinosa majors (large and small) attacked the army ants circling around the tree base from behind, while another group attacked the front line of the incoming army ant reinforcements by heading straight into the army ant foraging trail, occasionally dragging their abdomens on the ground. These actions of the second group of P. obtusospinosa majors resulted in the disorientation of army ant reinforcements at the front end of the trail. The major sign of army ant disorientation was their change from moving in an initially straight path to moving in various, random, directions. Without reinforcements, the group of army ants circling around the tree trunk was left behind. As this isolated group of army ants returned their attention toward the original nest entrance, both groups of P. obtusospinosa majors retreated into the nest, and the super majors resumed their head-blockade formation at the entrance. Even after the P. obtusospinosa majors had abandoned the front line of the army ant trail, army ant reinforcements continued to show signs of disorientation. After 30 to 45 min of switching at least three times between the defensive head-blockade formation and the dual offensive attacks, the P. obtusospinosa colony drove away the raiding army ants."

Huang (2010) - Minor workers have an extremely narrow size range (head width = 0.5mm to 0.7mm) and are discretely separated from major workers. The major worker head width distribution was bimodal and ranged from 1.1 mm to 2.4 mm with smaller major workers present in colonies approximately three times as frequently as larger major workers. Results of the cluster analysis (assuming two modes) suggested that small majors range from 1.1 mm to 1.7 mm in head width while larger majors range from 1.7 mm to 2.4 mm. Figure 1b shows that there is no major change in overall head shape when comparing small and larger majors, despite an increase in absolute head size.

From Wilson (2003): DIAGNOSIS A large trimorphic species placed in the pilifera group because of the 2-toothed hypostoma of the major but with other traits conforming to the fallax group. Very close to Pheidole hirtula (now a junior synonym of P. obtusospinosa), distinguished most readily in the supermajor, as illustrated, by the elongate foveae of the rear half of the dorsum of the head, with the interspaces densely foveolate and opaque. The tangled taxonomic history of this species and the true status of Pheidole vaslitii, previously associated with it but now revealed as a junior synonym or sibling species of Pheidole hyatti (q.v.), have been presented by Ward (2000).

From Wilson (2003): DIAGNOSIS A large trimorphic species (major, supermajor, minor) placed in the pilifera group because of the 2-toothed hypostoma but with other traits conforming to the fallax group. Very close to Pheidole obtusospinosa, distinguished most readily in the supermajor, as illustrated, by the rounded foveae of the rear half of the dorsum of the head, with the interspaces smooth and shiny. This form is considered by Ward (1999) to be a likely geographic subspecies of obtusopilosa rather than a full species.

MEASUREMENTS (mm) All from near Chapulco, Puebla. 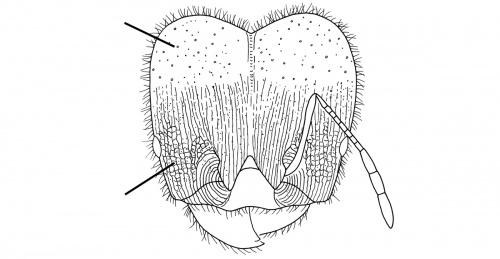