Ponera tenuis is found in leaf litter, logs, moss and other situations on the ground, always in rainforests.

Taylor (1967) - Easily recognized by the combination of medium size (HW 0.40-0.45 mm) with the characters of its species group (4-segmented antennal club and lack of an incised mesometanotal suture). The other 3 tenuis group species, with which tenuis is probably sympatric on New Guinea, are all smaller (HW 0.30-0.34 mm). In Samoa the species group characters are diagnostic. The absence of pupal cocoons provides a useful character for field recognition; this is the only known Ponera with naked pupae.

Beyond its habitat affinities, little is known about the biology of Ponera tenuis. 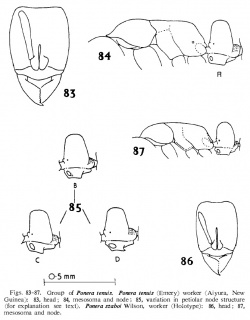 Pilosity and pubescence as described for P. huo1llica, except that erect hairs are lacking from the occiput and pronotum; these missing hairs may well have been rubbed off in this specimen, because they are present in more recently collected material determined as tenuis.

Variation in other worker series. The following measurements are based on three workers from a single nest series collected at Ebabaang : HW 0.42-0.43 mm, HL 0.49-0.52 mm, SL 0.33-0.35 mm, 01 82-86, SI 78-83, PW 0.32 mm. In these specimens the anterior half of the subpetiolar process is not perforated as in the lectotype, and the posterior angle of the process forms a right angle instead of an acute angle. The body color is uniformly blackish brown, and the appendage color is light yellowish brown; there is an excellent possibility that the considerably lighter color of the lectotype is due to fading.

Taylor (1967) - Wilson's (1957) redescription of a tenuis syntype, and his original description huonica cover general characters, but the following additional notes are pertinent:

1. Mandibular dentition varies intranidally in New Guinea samples. As usual in the genus, one observes 3 large apical teeth, followed by a series of 6-10 small denticles. In most specimens several denticles are larger than the others (usually one or 2 at about the middle of the series, and the posterior one). Minimally they are barely enlarged; maximally they are as large as the middle, or smallest, of the anterior trio of teeth. Only 2 of 30 New Guinean specimens have completely uniform denticle series. A regular row of denticles is usual in Samoan specimens, which show little tendency towards denticular heterogeniety.

3. Dorsal mesometanotal suture totally lacking in all specimens. It is sometimes represented by a narrow, but obtuse, impression, which never breaks the underlying sculpturation.

4. Structure of the subpetiolar process shows intrademe variation as illustrated in figs. 84 and 85 (variant types labelled A-D). The varying features include depth of the process, shape of its anterior and ventral outlines, size and shape of the fenestra, and degree of development of the posteroventral teeth. There is apparent geographical variation in expression of these characters. The samples differ as follows : Huon Peninsula specimens (including the "huonica" types) range in structure from type A (fig. 84) to type B (fig. 85), most being about intermediate. The Aiyura specimens range from type B to type C (fig. 85), most being about intermediate. The Samoan specimens are even less conservative, most have structure intermediate between types C and D (fig. 85-type D is a selected maximally bizarre example). At the other extreme a few Samoan specimens have type B petioles. 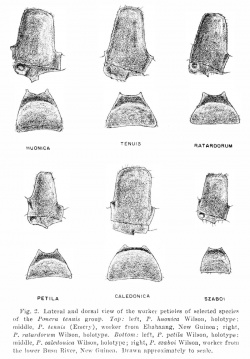 Taylor (1967) - Larvae have 3 pairs of glutinous abdominal tubercles. Pupae of all castes lack coccons (I have seen sufficient material to be sure that these are never spun).