As reported by Hölldobler and Wilson (1990) - This remarkable species was discovered by Heinrich Kutter (1950a) at Saas-Fee, in an isolated valley of the Swiss Alps near Zermatt. Its behavior has been studied by Stumper (1950) and Kutter (1969), its neuroanatomy by Brun (1952), and its general anatomy and histology by Gösswald (1953). A second population has been reported from near Briançon in the French Alps by Collingwood (1956) (see also Wegnez et al. 2015), a third in the French Pyrenees by Buschinger (1987c), and still others in the Spanish Sierra Nevada by Tinaut Ranera (1981). The latter was described as a separate species, Tetramorium kutteri (as Teleutomyrmex kutteri), by Tinaut Ranera (1990). Appropriately, the name Teleutomyrmex means "final ant."

The populations of T. schneideri, like those of most workerless parasitic ant species (Wilson, 1963), are small and isolated. The Swiss population appears to be limited to the eastern slope of the Saas Valley, in Juniper-Arctostaphylos woodland ranging from 1,800 to 2,300 m in elevation. The ground is covered by thick leaf litter and sprinkled with rocks of various sizes, providing, in short, an ideal environment for ants. The ant fauna is of a typically boreal European complexion, comprising the following free-living species listed in the order of their abundance (Stumper, 1950): Formica fusca, F. lugubris, Tetramorium caespitum, Leptothorax acervorum, L. tuberum, Camponotus ligniperda, Myrmica lobicornis, M. sulcinodis, Camponotus herculeanus, Formica sanguinea, F. rufibarbis, F. pressilabris, and Manica rubida. For some unexplained reason this little assemblage is extremely prone to social parasitism. Formica sanguinea is a facultative slavemaking species, preying on the other species of Formica. Doronomyrmex (= Leptothorax) pacis, a workerless parasite living with Leptothorax acervorum, was discovered by Kutter as a genus new to science in the Saas-Fee forest in 1945. In addition, Kutter and Stumper found Epimyrma (= Myrmoxenus) stumperi in nests of Leptothorax tuberum, as well as two parasitic Leptothorax, goesswaldi and kutteri, in nests of L. acervorum (Kutter, 1969).

Tetramorium inquilinum is a parasite of Tetramorium caespitum and Tetramorium impurum. Like so many other social parasites, it is phylogenetically closer to its host than to any of the other members of the ant fauna to which it belongs. In fact, it may have been derived directly from a temporarily free-living offshoot of this species, since T. caespitum and T. impurum (the host species at Briançon and in the Pyrenees) are the only nonparasitic tetramoriines known to exist at the present time through most of central Europe. It is difficult to conceive of a stage of social parasitism more advanced than that actually reached by Tetramorium inquilinum. The species occurs only in the nests of its hosts. It lacks a worker caste, and the queens contribute in no visibly productive way to the economy of the host colonies. The queens are tiny compared with most ants, especially other tetramoriines; they average only about 2.5 mm in total length. They are unique among all known social insects in being ectoparasitic. In other words, they spend much of their time riding on the backs of their hosts (Figure 12-1). The T. inquilinum queens display several striking morphological features that are correlated with this peculiar habit. The ventral surface of the gaster (the large terminal part of the body) is strongly concave, permitting the parasites to press their bodies close to those of their hosts. The tarsal claws and arolia are unusually large, permitting the parasites to secure a strong grip on the smooth chitinous body surface of the hosts. The queens have a marked tendency to grasp objects. Given a choice, they will position themselves on the top of the body of the host queen, either on the thorax or the abdomen. Deprived of the nest queen, they will then seize a virgin Tetramorium queen, or a worker, or a pupa, or even a dead queen or worker. Stumper observed a case in which six to eight T. inquilinum queens simultaneously grasped one Tetramorium queen, completely immobilizing her. The mode of feeding of T. inquilinum is not known with certainty. The adults are evidently either fed by the host workers through direct regurgitation or else share in the liquid regurgitated to the host queen. In any case, they are almost completely inactive most of the time. The T. inquilinum adults, especially the older queens, are highly attractive to the host workers, who lick them frequently. According to Gösswald, large numbers of unicellular glands are located just under the cuticle of the thorax, pedicel, and abdomen of the queens; these are associated with glandular hairs and are believed to be the source of a special attractant for the host workers. The abdomens of older T. inquilinum queens become swollen with fat body and ovarioles, as is shown in Figure 12-1. This physogastry is made possible by the fact that the intersegmental membranes are thicker and more sclerotized than is usually the case in ant queens and can therefore be stretched more. Also, the abdominal sclerites themselves are widely overlapping in the virgin queen, so that the abdomen can be distended to an unusual degree before the sclerites are pulled apart. The ovarioles increase enormously in length, discard their initial orientation, and infiltrate the entire abdomen and even the postpetiolar cavity.

From one to several physogastric queens are found in each parasitized nest, usually riding on the back of the host queen. Each lays an average of one egg every thirty seconds. The infested Tetramorium colonies are typically smaller than uninfested ones, but they still contain up to several thousand workers. The Tetramorium queens also lay eggs, and these are capable of developing into either workers or sexual forms (Buschinger, personal communication). Consequently the brood of a parasitized colony consists typically of eggs, larvae, and pupae of T. inquilinum queens and males mixed with those of Tetramorium workers. 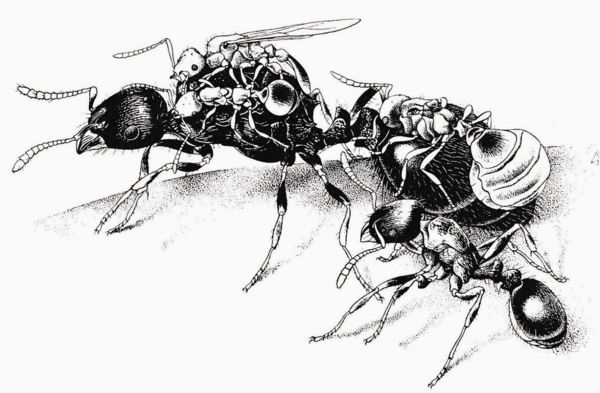 The bodies of the T. inquilinum queens bear the mark of extensive morphological degeneration correlated with their loss of social functions. The labial and postpharyngeal glands are reduced, and the maxillary and metapleural glands are completely absent. The mandibular glands, on the other hand, are apparently normal. In addition, the queens possess a tibial gland, the function of which is unknown. The integument is thin and less pigmented and sculptured in comparison with that of Tetramorium; as a result of these reductions the queens are shining brown, an appearance that contrasts with the opaque blackish brown of their hosts. The sting and poison apparatus are reduced; the mandibles are so degenerate that the parasites are probably unable to secure food on their own; the tibial-tarsal cleaning apparatus is underdeveloped; and, of even greater interest, the brain is reduced in size with visible degeneration in the associative centers. In the central nerve cord, ganglia 9-13 are fused into a single piece. The males are also degenerate. Their bodies, like those of the males of a few other extreme social parasites, are "pupoid," meaning that the cuticle is thin and depigmented, actually greyish in color; the petiole and postpetiole are thick and provided with broad articulating surfaces; and the abdomen is soft and deflected downward at the tip.

In its essentials the life cycle of Tetramorium inquilinum resembles that of other known extreme ant parasites. Mating takes place within the host nest. The fecundated queens then either shed their wings and join the small force of egg layers within the home nest or else fly out in search of new Tetramorium nests to infest. Stumper found that the queens could be transferred readily from one Tetramorium colony to another, provided the recipient colony originated from the Saas-Fee. However, Tetramorium colonies from Luxembourg were hostile to the little parasites. Less surprisingly, ant species from the Saas-Fee other than Tetramorium caespitum always rejected the T. inquilinum. However, Buschinger (personal communication) has pointed out that the Saas-Fee population could be caespitum or impurum, or a mixture of both. In other words, the transfer might have been attempted across species.