The wooly ant, Tetramorium lanuginosum, has long been recognized as a widespread tramp species dispersed through human commerce. Based on its distribution and those of its closest known relatives, T. lanuginosum appears to be native to tropical and subtropical East Asia and perhaps also northern Australia and western Oceania. Tetramorium lanuginosum appears to be particularly common on small islands, possibly due to reduced competition with dominant ants in these habitats. Recent first records of T. lanuginosum on many islands of Samoa, the Galapagos, Madagascar (and neighboring island groups), and the West Indies suggest that exotic populations of T. lanuginosum are expanding on numerous tropical islands. Nonetheless, it appears unlikely that T. lanuginosum will ever become a significant exotic pest species, except perhaps on small tropical islands (from the abstract of Wetterer 2010).

Monomorphic robust ants with a slow and steady gait. Workers possess a thick coat of soft erect hairs, some of which are branched into two or three tips.

Modified from Wetterer (2010): Tetramorium lanuginosum is widespread in tropical and subtropical parts of Asia, Australia, and Oceania. Outside of this region most records are concentrated in three areas: Madagascar and neighboring islands, the Galapagos, and the Eastern Caribbean. Records for these island groups are largely records from the past ten years (c. 2000-2010). Other more scattered reports including records from tropical Africa, the Mediterranean, Mexico, and the southeastern US, Northern Europe (three sites - Kew Gardens, the Birmingham Botanical Garden, and the Dudley Zoo) and one site in the Netherlands (an indoor record in Amsterdam; DE JONGE 1985).

It is believed Tetramorium lanuginosum is native to tropical Asia. The species occurs over a seemingly continuous range from India, through tropical and subtropical East Asia, to northern Australia, and thus is probably native to much of this region, and perhaps even to parts of western Oceania, e.g., the Solomon Islands, Palau, and the Mariana Islands. (Wetterer 2010) 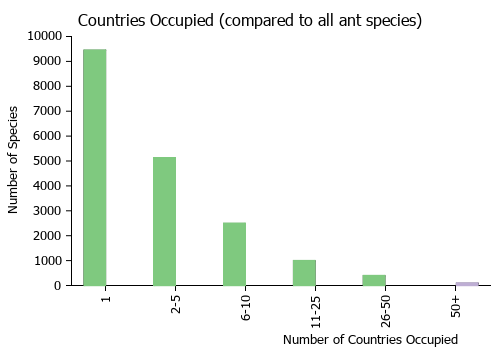 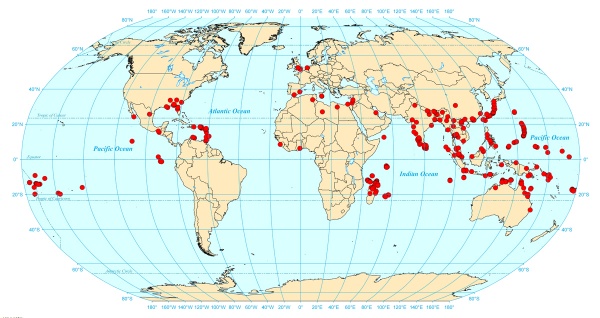 Distribution records of Tetramorium lanuginosum as provided by James Wetterer, 2010.

Hita Garcia and Fisher (2011) - In the Malagasy region T. lanuginosum is relatively widespread. The species can be found in many locations of Northern Madagascar and on most of its surrounding island systems, e.g. the Comoros, Mayotte, Mauritius, Seychelles, and Reunion. Wetterer (2010) points out that T. lanuginosum might have reached the Malagasy region recently because almost all records of the species are dated after 2001. We only tentatively agree with this point of view since T. mauricei, now a synonym of T. lanuginosum, was collected in 1942 from Mauritius and later described by Donisthorpe (1946). Another reason to be cautious is that most collecting in the Malagasy region has been performed in the last two decades; thus, large numbers of fresher specimens does not necessarily prove that the species was not abundant previously. Nevertheless, T. lanuginosum was not mentioned from Mauritius by Ward (1990) so it is possible tat the species was already present in the area but spread over the last one or two decades.

Sharaf et al. (2018) - This species was found nesting under a stone next to a date palm tree where soil was moist. It was also found in leaf litter under a mango tree.

Additional images can be found on the lanuginosum category page.