Known only from the type material, which was collected from a "rotting branch."

Taylor (1967) - The nominate species of the taipingensis group. Workers differ from those of the related Ponera syscena and Ponera colaensis in possessing a distinct median clypeal tooth. Additionally colaensis has a narrower head (cephalic index 81-83 as opposed to 84-86 in taipingensis), and wider petiolar node (petiolar node index 88-91 against 84-85); and syscena has a much narrower node (PNI 79-82). The 4th member of its complex, Ponera loi, has a distinct clypeal tooth, but the cephalic and petiolar node indices have quite different ranges from those of taipingensis (CI 79-83, PNI 78-82), and the ranges of petiole height measurements differ between the 2 species (PH 0.39-0.44 mm in loi, 0.45-0.47 mm in taipingensis).

This species is distinguished from the only other known Malayan Ponera (Ponera japonica) by its larger size (HW 0.52-0.54 mm against 0.43 mm), longer scapes - those of Malayan japonica specimens clearly fail to attain the occipital border which is reached by the scapes in taipingensis - and thicker petiolar node, forming an almost exact half-circle in dorsal view. 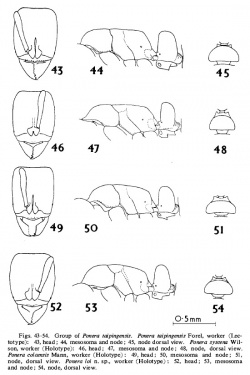 Mandibles smooth and shining, clypeus irregularly shagreened, moderately shining. Head opaque, closely covered with moderately large, almost contiguous, punctae, about 0.01 mm in diameter. Occipital area shining, with scattered small punctures. Pronotum moderately shining, finely and closely punctate. Mesonotum with puncturation similar to that of head, but a little more scattered; dorsum of propodeum similarly, but more sparsely punctate — the inter-punctural intervals slightly more than average diameter of punctae. Sides of mesosoma moderately punctate and feebly shining, a little more so on middle of lateral faces of pronotum and propodeum. A somewhat effaced longitudinal striate-rugosity on lower 1/2 of mesepisternum and on mete pi sternal area. Declivitous face of propodeum shining, with traces of an effaced transverse rugosity, much as described above for Ponera chapmani. Sculpture of node and gaster as in chapmani, the almost vertical striation of the posteroventral parts of the sides of the node less distinct, and the punctae of the 1st 2 gastric tergites smaller.

Pilosity sparse, limited to a few fine erect to suberect hairs on mandibles, clypeus, frontal lobes, dorsa of mesosoma and node and entire gaster, where they are relatively very sparse. Pubescence everywhere moderately abundant. Color as described above for P. chapmani.