The majors, minors and females of C. americanus are relatively shiny and with a dark reddish-brown head and brown gaster and often a lighter brown mesosoma. The cheeks and malar area have a number of erect and suberect setae, pubescence is sparse and noticeable only on the dorsum and partially on the sides of the mesosoma and on the gaster. The clypeus is elevated longitudinally along the midline but does not form a carina. The head is coriaceous, or finely punctate, with the few scattered and insignificant, deeper punctures.

The male is a large, dark brown specimen that does not appear to have characteristics to separate it from other large male Camponotus.

Camponotus americanus can be separated from most other species in the subgenus Camponotus by the relatively long scapes and the relatively shiny surfaces. The long scapes will separate C. americanus from other species that are relatively smooth, such as Camponotus herculeanus (southern Canada and most of US) and even some of the species in the subgenus Tanaemyrmex. The shiny gaster would separate C. americanus from others that have a dull gaster with short pubescence, such as Camponotus modoc (southern Canada and most of US, northern Mexico).

Camponotus americanus can be separated from Camponotus novaeboracensis (southern Canada and most of US) as the punctures on the head are fine and insignificant and mesosoma is brown, instead of red.

It is difficult to separate C. americanus from Camponotus castaneus (SE Canada, eastern US), of which it was once considered to be a subspecies. The easiest character is the presence of numerous erect and suberect setae on the cheeks and malar area of the major, an area where erect setae are usually absent in majors of C. castaneus. Additionally, the scape of C. americanus is round at the base, whereas it is flattened and often widened in C. castaneus. It is usually necessary to have at least 1 major in a series to identify C. americanus. It is not unusual to find individual minors that lack erect setae on the malar area or have a couple of setae on one side and none on the other, making identification of series that contain only minors difficult or impossible. The two species are obviously similar and both must be placed in the same subgenus. As C. castaneus is clearly a member of Camponotus (based on the flattened clypeus, with only evidence of a raised area posteriorly), C. americanus must also be a member of the subgenus Camponotus. 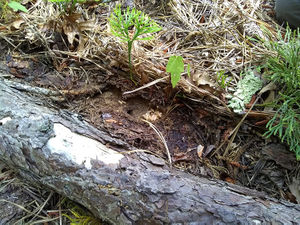 Camponotus americanus is one of the few species of the subgenus Camponotus that normally nests in the soil (Wheeler, 1917a), without a mound or under rocks (Buren, 1944), instead of in wood. Often there is simply a hole in the ground. It rarely nests in rotten logs and may be a house pest (Hansen and Klotz, 2005; Walker, 2013). Nests are located in red or brown clay soils, dark brown sand, to rocky soils, often in the shade, and can be collected under less than 5 cm of litter. In warm sites, C. americanus tends to occupy relatively cool chambers (Diamond et al., 2012).

Camponotus americanus appears to rely on a few, highly capable foragers (Pearce-Duvet et al., 2011), which can be found foraging diurnally (09:00 - 20:00) on the soil surface and in vegetation and are attracted to peanut butter baits. Foragers were also collected in pitfall traps. Ellison et al. (2012) report it as a nocturnal omnivore, which tend aphids (Williams et al., 2011), as well as the magnolia scale Neolecanium cornuparvum (Vanek and Potter, 2010). They prey on the red oak borer Enaphalodes rufulus (Coleoptera: Cerambycidae) (Muilenburg et al., 2008).

Eisner and Wilson (1952) discuss the morphology of the proventriculus. Hölldobler and Engel-Siegel (1984) discuss the lack of the metapleural gland in this species.

Erect and suberect setae abundant, specifically on clypeus, cheeks, malar area, frontal carinae, extending back to posterior margin, dorsum of mesosoma, petiole and all surface of gaster, absent on sides of head near eyes, on posterior lateral corners, on scapes (except apex) and tibiae, except for scattered bristles on flexor surfaces.