Primarily subterranean, this species can be found nesting under stones or logs and in the soil, or occasionally with a small mound, in a wide variety of habitats.

The hairs of this species are long, those on the ventral surface of the head are often at least 0.20 mm in length, and those on the gaster are often at least 0.23 mm in length. Most of the hairs on the gaster are confined to the posterior edges of each terga. The apex of the petiole is moderately sharp, usually concave or notched. (Mackay and Mackay 2002)

Ellison et al., (2012) - All species in the claviger group smell like citronella when disturbed or crushed. Lasius interjectus has a sharply pointed petiole like Lasius claviger and Lasius subglaber, but L. interjectus has many long, erect hairs all over the first segment of its gaster and only on the edges of the other segments of the gaster.

Lasius interjectus ranges from southern New England west to Idaho, south to Wyoming and New Mexico, and east into Oklahoma, Arkansas and Georgia. 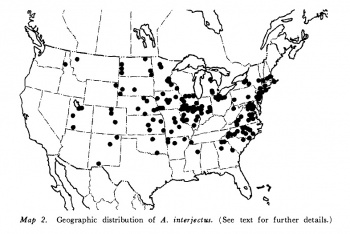 Wing (1968) - Of the 337 samples of this taxon, 66 had associated nest data. Nests in or adjacent to buildings numbered 27. Of the nests not associated with buildings, 10 were in the open, 16 in woods, and 13 of uncertain status. With respect to immediate nestcover, 10 were under stones, 8 associated with wood, 1 in a mound, 11 with other or no cover, and 9 of uncertain status. The kind of immediate nest-cover did not appear to be correlated with whether nests were in woods or in the open. Carter (1962b) reported on 9 nests in North Carolina. Most records were from woods or associated with buildings. Nests were in rotted stumps, under stones, and without any visible covering object in soil ranging from compact red clay to loose sand. Talbot (1963) studied 9 colonies in southern Michigan. All of these colonies were either in woods or along their edges in places where leaves had accumulated on the ground. Old, well-galleried stumps accounted for 5, 1 occupied a well-galleried log and the soil under it, and 3 were in low mounds with diameters of 3 to 4 feet. One of the mounds had been built up around a stump, which later had rotted away. Wheeler and Wheeler (1963) reported 27 samples of Lasius interjectus from North Dakota; I have seen specimens from about 1/2 of these samples. Of the 19 nests observed, they found 7 nests in grassy mounds, 7 under stones, 3 under wood, and 2 under other cover. In North Dakota nests were usually in grasslands; 14 of the 19 were found in this habitat. Of the 5 other nesting situations, 4 were at the edges of woods and 1 in woods.

Annual sexual cycle One factor complicating the interpretation of the cycle of interjectus is that it frequently infests houses. The flights from houses come to official attention far more frequently than do normal flights. The samples of this species are thus strongly biased in this respect. Most naturally occurring flights take place in June and July, with a few earlier and later. The extreme flight dates are largely determined by conditions in a given locality and year.

Taking June as the starting point of the cycle, the number of nests with alates drops in July, while the number of flying alates rises. Flights have generally stopped by September, and by October no more dealate queens can be found. The nests of interjectus may, however, still contain a few sexual individuals. The beginning of winter brings on a number of nuptial flights, usually launched into the basements of heated buildings. These unseasonable flights continue through the winter and well into the spring. The few dealate queens collected during this period arise from these flights.

Close analysis of the data indicates that a sizable proportion of the records of workers and alates for March, April, and May are probably from field nests containing adult alates. In this species, it appears that the production of alates begins in the fall or winter of the previous year. Once a nest builds up a sufficient number of alates, the existence of the right combination of environmental factors may trigger a flight. This hypothesis would account for the unusually high number of interjectus flights associated with heated buildings during the winter and early spring.

A flight that I observed in Raleigh, North Carolina, on April 20, 1949 is the earliest natural flight known to me. The nest was located in grass near a sidewalk. Large numbers of males and females were swarming out of the nest at 5:30 p.m. Males, females, and workers were intermingled, and some females were breaking away and running up and down the sidewalk. Some males were attempting to copulate with females on grass blades as the flight progressed. In general, late May is the earliest time for natural flights even in the South. This species, however, like claviger, undergoes swarm-outs. Although these formicine warm-up drills occur frequently and involve large numbers of alates, they rarely result in unseasonably early flights. The swarm-outs may, however, give rise to some "leakage" of alates, which wander too far from the nest and fail to find their way back. interjectus seems to be more strongly attracted to lights than do other species of Acanthomyops (= Lasius). Thus a number of the captures of this species in the period prior to regular flights occur at lights.

The sexual cycle of interjectus is atypical of the genus in that it nearly blankets the entire year. This is largely because the queens apparently prefer to found their colonies near buildings. The attractiveness of artificial lights may also influence their selection of nesting sites.

Talbot (1963) studied a single colony of interjectus in Livingston Co., Michigan during a 50-day period in 1960. Between June 16 and August 25, this colony, which produced only males that year, launched 22 flights. About 3 weeks of this period were unfavorable for flights; in a more favorable year the flight period might end earlier. Buren (1944) reported flights for July and early August in Iowa.

Talbot (1963) reported that June 11 was the earliest date on which she had found alates in nests. Since she normally arrived at the Reserve not much before June 11, this can only mean that some interjectus nests contained adult alates upon her arrival. Evidently adult alates occur in nests in the early spring, and perhaps in the winter.

Talbot observed 43 nests over a 10-year period; her data on this species are far more extensive than on the other 3 species studied. Rains provided the stimulus for workers to open up the nest by excavation. Flights occurred in the late afternoon, with temperatures between 67° and 80°F, relative humidity between 56 and 99 percent, and without wind. An estimate of the number of alates released during flights was made on several occasions. In 1960, when only males were produced in one colony studied, an estimated 40,000 individuals flew from the nest in 22 flights. In 1958, an estimated 63,600 males and females flew from a nest in 4 flights, and the nest still contained alates. The bulk of these alates, an estimated 55,200, were released during a 2-hour period on June 17. As flights from a given nest proceeded, fewer and fewer alates were released. In some nests alates were still left in the nest after the last flight had occurred. She noted that occasional matings took place on leaves and grass stems prior to flights.

This species is likely to be a temporary parasite, but its host is unknown.

This species is a host for the ant Lasius latipes (a temporary parasite).

Wing (1968) - A pointed worker specimen had a single pointed specimen of Batrisodes montrosus (Coleoptera: Pselaphidae) associated with it. Records of insects associated with interjectus from the literature are: Schwarz (1890), Batrisodes montrosus, B. ferox, and Serica vespertina (Coleoptera: Scarabaeidae). Wickham (1900) reported on the sifting of an old stump which contained worker ants, Adranes lecontei, Ceophyllus monilis, (Coleoptera: Pselaphidae), and Limulodes paradoxus (Coleoptera: Limulodidae). The ant species was determined by Wasmann as Lasius "interjeotionis"; I believe that it is safe to assume that interjectus was the ant species associated with these guests. 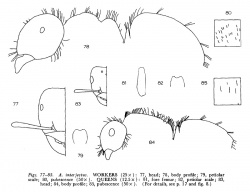 Wing (1968) - Large, HW at least 1.08 mm, most specimens measuring 1.20 mm or more; AL at least 1.28 mm, most specimens measuring 1.50 mm or more. Head wide, CI at least 98, often 100 or more. Basal margin of mandible often with 1 or more denticles. Antennae slender; SI 75 to 86, most specimens falling between 78 and 85. Propodeum convex in profile, often strongly so. Crest of petiolar scale sharp to moderately sharp, usually narrowly but distinctly emarginate; sides usually convex. Standing body hairs simple to minutely barbulate, long; those on dorsum of gaster confined to rows along posterior edges of tergites beyond first; those on gula confined to its posterior 2/3. Pubescence on dorsum of gaster dilute, that on upper part of head moderate to dense.

Wing (1968) - Basal margin of mandible usually with 1 or more denticles. Head broad, HW almost always 1.53 mm or more, CI 102 to 110, usually 104 or greater. Antennae long and slender, penultimate and antepenultimate segments of funiculus at least as long as wide, usually longer than wide. SL almost always over 1.08 mm, SI 64-75, usually 67 or over. Crest of petiolar scale sharp to moderately sharp, usually narrowly but distinctly emarginate; sides convex. Body size moderate, AL of most specimens falls between 2.35 and 2.85 mm. Standing body hairs finely barbulate and simple, long, fairly numerous, especially on alitrunk ; those on gula confined to its posterior 1/3 to 3/4.

Head and appendages moderately to densely pubescent, other parts of body mostly with dilute pubescence. Standing hairs on dorsum of gaster confined to posterior edges of tergites beyond first. Body color of most specimens light brownish yellow, a few sordid yellowish brown, often with gaster darker than rest of the body.

Wing (1968) - Type locality: New Jersey. Location of type: Dr. Per Inge Persson, Naturhistoriska Riksmuseum, Stockholm, kindly sent me information about the type, which is in their collection. It is a queen with the following data: "N. Yersey, Belfrage." Belfrage was a Swedish collector who moved to the USA in 1850. There are no type specimens located in the collections of the Naturhistorisches Museum in Wien.