Mackay and Serna (2010) - The worker is a small (total length about 2.5 mm, n =2) reddish-brown ant. The mandibles have six teeth, the frontal carinae do not reach the dorsad occular suture, the frontovertexal corners are barely extended into auricle-like structures; the pronotum has three angulate processes or teeth, including the medial process and two lateral processes, together with a pair of posterior swellings, and the mesonotum has a pair of conical processes; the propodeum has a pair of anterior, blunt processes and two well-developed angulate posterior processes; and the posterior 1/3 of the petiole is raised into a blunt process that appears bidentate when seen obliquely from above; the postpetiole has two parallel raised regions on the dorsal surface; and the gaster lacks longitudinal raised areas. The posterior femur has a distinctive ventral angulate process, followed distally by a poorly defined carina.

This species would key to Mycetophylax olitor in Kempf (1964), found in Brazil and Argentina. Mycetophylax andersoni is somewhat larger (HL of M. olitor 0.64, HW 0.56 from Kempf, 1964), has fewer mandibular teeth (7-8 in M. olitor), the midpronotal tubercle is approximately the same size as the lateral tubercles (midpronotal tubercle much smaller than lateral tubercles in M. olitor), and the propodeal spines are well developed (poorly developed in M. olitor). The mandibular teeth are worn and partially hidden by the clypeus in the holotype and badly worn in the mandible of the other specimen, but this species appears to be the only one of the strigatus species complex with six mandibular teeth (and as the members of the rimosus species complex all have five mandibular, it is apparently the only species in Cyphomyrmex with six teeth). 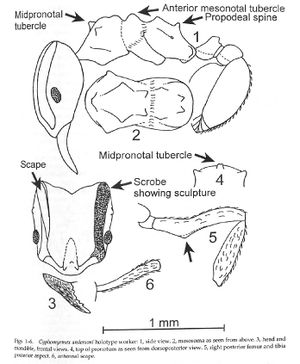 Erect hairs absent, except on mandible; hairs on scape and head appressed, hairs on ventral surface of head and anterior margin of procoxa subdecumbent, hairs on mesosoma, petiole, postpetiole, legs and gaster appressed.

This new species is named in honor of Robert Anderson, who collected these specimens as well as thousands of other interesting specimens.