P. bilimeki is an abundant and common species throughout its range. It nests almost anywhere including in rotten wood and under stones and inhabits mostly open and highly disturbed areas. It is known to remove seeds (Atchison & Lucky, 2022; Stamp & Lucas, 1990).

One of a number of species once suggested (Wilson 2003) to be the single highly variable species P. bilimeki. This species, now more narrowly defined, has minor workers that have shorter scapes than the closely related Pheidole anastasii. The head of the minor of bilimeki is also less rounded behind and both majors and minors are brown. The current understanding of this species now excludes the Hispaniola and Jamaica bilimeki like form Pheidole jamaicensis.

P. anastasii overlaps in its range with P. bilimeki. These two species maintain clear ecology differences, primarily in habitat preferences, that are diagnostic: P. anastasii nests in plant cavities in the shaded understory of mature or second growth wet forest. In contrast, P. bilimeki nests almost anywhere, including in rotten wood and under stones, but occurs mostly in open and highly disturbed areas.

The following can be helpful in separating bilimeki-like Phediole (Longino and Cox 2009):

This species is native to the Neotropical region, from the north of South America to the south of North America, and is present throughout the Caribbean (Guénard, Weiser, Gomez, Narula, & Economo, 2017). It has been introduced into the Nearctic and Palaearctic regions (Antweb, 2019; Guénard et al., 2017; Sarnat et al., 2015). In the Canaries, it has only appeared in three localities on Tenerife and ten on La Gomera (Hernandez-Teixidor et al., 2020).

Longino and Cox (2009) - This is a heterogenous assemblage that may itself prove to be multiple species when more material is available. The main feature differentiating P. bilimeki from Pheidole anastasii, Pheidole jamaicensis and Pheidole punctatissima is the shorter scapes. Typically specimens are uniformly red brown, but some collections from the northern part of the range, including the type of P. bilimeki, are yellow orange, like P. anastasii. The sculpture on the first gastral tergite is highly variable. There is always some degree of shagreened, opaque sculpture anteriorly, around the postpetiolar insertion, but it varies from covering the entire tergite to covering only about the anterior third. Within nest series, shagreening is typically more extensive on minor workers than major workers; in many series where the first gastral tergite is completely shagreened in the minor worker, only the anterior third is sculptured in the major. Pheidole bilimeki is a common species in open, recently or frequently disturbed habitats. It occurs in all tropical climate zones where ants occur: lowland dry forest, lowland wet forest, and montane habitats to about 1500m elevation. In Costa Rica it is a common ant of roadsides, nesting under stones or in dead fenceposts. It is a frequent pest ant in houses. It is a common ant at baits in second growth dry forest vegetation in seasonally dry Guanacaste Province. It can also be abundant in large disturbances deep within primary forest reserves. The Peñas Blancas Valley is a large forested reserve in the Cordillera de Tilarán in northern Costa Rica. In 2001 there was a large debris torrent that created a very large area currently undergoing primary succession. The area is about 5km from the edge of the reserve and human settlement. As of early 2008 the area was dominated by P. bilimeki.

At La Selva Biological Station, in lowland rainforest on the Atlantic slope, P. bilimeki is abundant in the laboratory clearing, where it can be a pest ant in buildings. It is never found in the forest. At Sirena in Corcovado National Park in southeastern Costa Rica, P. bilimeki is common in the vegetation of the upper beach margin and extending less than 20m into the forest.

In the Canary Islands, where it has been introduced, it is occasionally found inside houses, but more frequently in greenhouses (Sarnat et al., 2015). There is little indication that this species causes a significant impact on agricultural systems or native ecosystems. As it has low tolerance for cold climates, it is not considered a highly invasive species (Sarnat et al., 2015; Hernandez-Teixidor et al., 2020). 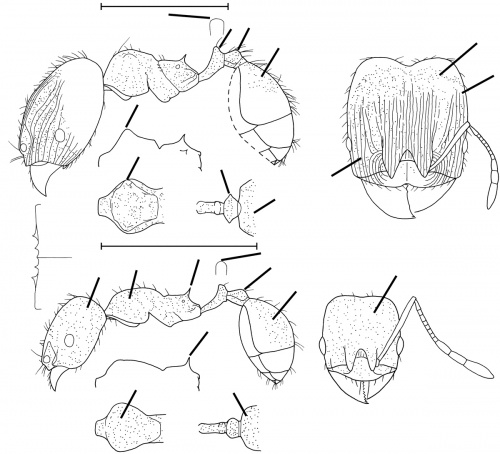