In the southeastern United States, where I have observed the species (or complex of sibling species) over many years, colonies of dentata occur in a wide range of habitats, from relatively thick coniferous and deciduous woodland to beaches and even city streets. They prefer to nest in rotting logs and stumps, but also readily occupy soil beneath pieces of rotting wood and in open ground. In Pensacola, Florida, I found them one of the commonest ants in and around concrete sidewalks. Similar versatility has been reported elsewhere in Florida by Naves (1985) and in western Texas by Moody and Francke (1982). I have found dentata to be an easily collected and managed species for laboratory studies, having used colonies to demonstrate enemy specification in alarm-defense communication (Wilson 1975d, 1976a) and the fixed nature of major-minor ratios even in the face of intense predator pressure (Johnston and Wilson 1985). Laboratory colonies feed voraciously and thrive on insects and sugar, growing to maturity within a year or so. G. C. and J. Wheeler (1953b) have provided a description of the larvae of all castes and instars. (Wilson 2003)

This very adaptable and abundant ant is known to occur from Calvert County, Maryland, south to the Florida Keys, west to Illinois, Kansas, El Paso and the Davis Mountains of Texas, thence south to northern Mexico (Monterrey, Nuevo Leon). (Wilson 2003) 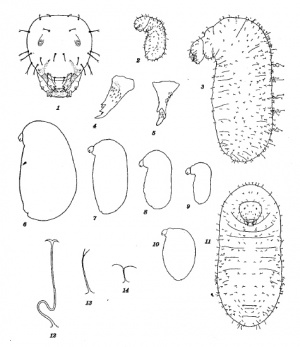 Naturhistorisches Museum Wien, Vienna - as reported in Wilson (2003) Unless otherwise noted the text for the remainder of this section is reported from the publication that includes the original description.

Major: rugoreticulum of head placed next to antennal fossa in advance of eye level; carinulae of frontal lobes mostly limited to margins of the lobes and extending posteriorly to the level of the eyes only by an Eye Length; occipital margin in full-face view deeply concave; occipital corners smoothly rounded, almost semicircular; humerus and mesonotal convexity low and smooth, rounded in profile; apex of petiolar node in side view strongly tapered; postpetiole from above elliptical, with bluntly angular lateral margins; promesonotal dorsum completely smooth.

COLOR Coloration and size vary greatly, as described by Naves (1985) in Florida: “I have found colonies of small dark specimens in wooded areas around Gainesville and large specimens that nest in sandy soil on beaches in south Florida and the Florida Keys. I also found a yellowish variant that inhabits the marshlands of the Keys and another variant with quite large majors that vary in color from reddish to very dark brown nesting in open areas around Gainesville.” Naves believes that all of the variation is of a single species. On the other hand, Stefan Cover has provided the following suggestive observations that may point toward multiple sibling species: “Variation similar to that reported by Naves in Florida is present throughout much of dentata’s range. In many places in the southeastern United States, there are lighter colored open-ground forms and darker forest-inhabiting forms. In at least one case there are associated life-history differences. The typical dark, forest-inhabiting form common in the southeast produces monogynous colonies containing several hundred individuals. In Calvert Co., Maryland, at the northeastern extremity of its range, only a light colored open-ground form is present. It forms polygynous colonies often containing over 5,000 ants. This strongly suggests dentata may be a sibling species cluster like the Aphaenogaster rudis complex.” 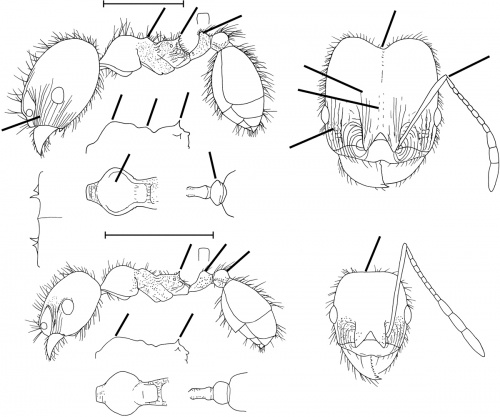