Aenictus occurs throughout Africa and in tropical and subtropical areas from India east through southern China to Taiwan and south to Australia with outlier, temperate-climate species or populations in Japan, Afghanistan, Armenia and south-central Australia (Bolton et al., 2006; Gotwald, 1995; Shattuck, 1999, 2008). While widespread, nowhere are they common. It contains 217 valid species and subspecies. The phylogenetic relationship of Aenictus to other ants has been investigated by Bolton (1990), Baroni Urbani et al. (1992), Brady (2003), Brady and Ward (2005), Brady et al. (2006), Moreau et al. (2006) and Brady et al. (2014).

Male The males of Aenictus are of decidedly army ant-like habitus and distinguishable from other dorylines by a combination of single segment in the waist, femora never extremely flattened relative to tibia, M·f1 vein of fore wing situated distal or near to cu-a, Rs·f2–3 absent, pterostigma broad and conspicuous. All New World army ant genera with similar habitus can be distinguished by fore wing venation, in particular presence of Rs·f2–3 and marginal cell closed along the leading edge by R·f3 connected to Rs·f5. In the Old World, Aenictogiton males can be easily told apart by their ‘hanging’ Rs·f2–3 vein in the fore wing, while Dorylus have a narrow pterostigma and dramatically flattened femora that contrast with tibiae that are more circular in cross-section.

Jaitrong and co-authors have been revising Aenictus species groups, based on worker morphology, and this is a great help when working through species determinations.

Aenictus is widely distributed in the Old World. The vast majority of species are found in Southeast Asia, with the Afrotropics being the other center of diversity. A few species range into the southern parts of the Palearctic region, and there is a number of species known from Australia. (Borowiec 2016)

All known species are "army ants" and conduct raids using large numbers of workers, primarily attacking other ants, social wasps and termites. While there are reports of these ants preying on other insects and even collecting honeydew from homopterans (Santschi, 1933; Gotwald, 1995), these habits appear to be uncommon.

Foraging raids undertaken by these ants occur both day and night, usually across the ground surface but occasionally also arboreally. During raids, numerous workers attack a single nest or small area, with several workers coordinating their efforts to carry large prey items back to the nest or bivouac.

Aenictus have a nomadic life style, alternating between a migratory phase in which nests are temporary bivouacs in sheltered places above the ground and a stationary phase where semi-permanent underground nests are formed. During the nomadic phase bivouacs move regularly, sometimes more than once a day when larvae require large amounts of food. Individual nests usually contain up to several thousand workers, although nest fragments containing only a few hundred workers are often encountered.

Borowiec (2016) - This Old World lineage contains some of the more conspicuous army ants and is the largest doryline genus.

Given the number of described species and their abundance and importance as insect predators in the Old World tropics, the biology of Aenictus is poorly studied. The impressive species and morphological diversity is likely reflected in the diversity of habits, although all thus far observed species seem to be specialized predators of other ants (but see Staab 2014b for a report on honeydew feeding). Members of some groups are known to form colonies of up to 80,000 individuals, forage above-ground in conspicuous columns and bivouac in semi-open spaces, while others are much more inconspicuous and cryptic. Aenictus queens synchronize brood production and colony life cycle goes through statary and nomadic phases (Schneirla and Reyes 1966). The nomadic phase lasts on average 14 days, about the same amount of time as in the Neotropical genera, but the statary phase is much longer and lasts 28 days, as opposed to 20 days in Eciton. During the nomadic phase in Eciton the daily colony emigrations always follow raids, whereas in Aenictus they can be initiated after a time of quiescence and occur without regularity, often multiple times a day. The descriptions of foraging behavior for several species are available; Wilson (1964) in his revision provides notes on foraging of selected species. Chapman (1965) recounts observations of a few species in the Philippines, mostly Aenictus gracilis and Aenictus laeviceps, and Schneirla and Reyes (1966, 1969) study these two epigaeic species in detail. Schneirla (1971) compares raiding and emigration behavior of Aenictus laeviceps to other army ants, Eciton and Neivamyrmex.

Rościszewski and Maschwitz (1994) and Hirosawa et al. (2000) studied prey specialization among sympatric Aenictus in Asia. Both studies found evidence of resource partitioning and observed differences in foraging strategies. Gotwald and Cunningham-van Someren (1976) and Gotwald (1976) are the only publications focusing on the behavior of African forms. At least some species support a community of myrmecophiles (Chapman 1965, Maruyama et al. 2009).

Billen and Gotwald (1988) described the anatomy of Dufour gland in three Asian Aenictus and argued that its structure, unusual among ants, shows affinity with Dorylus. Oldham et al. (1994) characterized the trail pheromone of Aenictus species related to A. laeviceps and demonstrated that it is produced by the postpygidial gland and Billen et al. (1999) further studied the structure of this gland. Hölldobler et al. (1996) described the histology and ultrastructure of the metatibial gland in Aenictus ceylonicus. 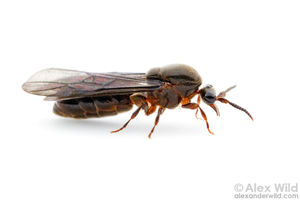 The majority of Aenictus species are monomorphic, with a few exhibiting some weak polymorphism. Aenictus inflatus is unusual within the genus as it has a distinctly polymorphic worker caste. There are a large number of species that are only known from males and most of the species described from workers have yet to be associated with any known male specimens.

Queens are highly specialised and look less like workers than in most ant species. They have greatly enlarged gasters and are termed dichthadiform. New colonies are created by the division of existing colonies, as opposed to individual queens founding alone.

Borowiec (2016) - The phylogenetic position of Aenictus has been difficult to infer. Phylogenomic data suggests that it is sister to the Aenictogiton plus Dorylus clade but they also show that these two lineages diverged very long ago, most likely in the Cretaceous (Borowiec, in prep.). The comprehensive morphology-based study of Brady and Ward (2005) placed it sister to Aenictogiton plus Dorylus; subsequent molecular analyses recovered it sister to New World army ants (Brady et al. 2006) and, later, sister to the Aenictogiton plus Dorylus clade, although with low support (Brady et al. 2014). The internal phylogeny shows that the African species of Aenictus are nested within South East Asian forms (Munetoshi Maruyama pers. comm.; Borowiec, in prep.).

Aenictus was first described based on a male from India, named for its ‘aenigmatical structure’ by Shuckard (1840b). Shuckard correctly recognized its affinity to other doryline ants, but the worker caste was not known at the time. Frederick Smith (1857) described a new genus based on workers, Typhlatta from Borneo, from material collected by Alfred Russell Wallace. It was not until 1890 that the male and workers of these ants were collected together (Forel 1890c).

The trend of describing unassociated males unfortunately continued and Aenictus is an example of ‘dual taxonomy’. Many names are either worker- or male-based, and there is no single species known from workers, queens and males (Gotwald and Leroux 1980, Bolton 2003). The internal phylogeny of the genus has been tackled with the cladistics analysis of Wilson (1964) and a phenetic study of quantitative traits (Gotwald and Barr 1988). As of this writing, Munetoshi Maruyama (pers. comm.) is working on a comprehensive molecular phylogeny of the genus. The taxonomy of the Asian forms received most attention and was first the subject of a thorough revision of Wilson (1964), recently followed by a long series of studies that described many new taxa and provided new keys for most of the species groups (Bharti et al. 2012, Jaitrong and Eguchi 2010, Jaitrong and Hashimoto 2012, Jaitrong and NurZati 2010, Jaitrong and Wiwatwitaya 2013, Jaitrong and Yamane 2010, 2011a, 2012b, 2013, Jaitrong et al. 2010, 2011, 2012, Li and Wang 2005, Liu et al. 2015, Mathew and Tiwari 2000, Staab 2014a, Staab 2015, Terayama and Yamane 1989, Terayama and Kubota 1993, Wang 2006, Wong and Guénard 2016, Wiwatwitaya and Jaitrong 2011, Yamane and Hashimoto 1999, Yamane and Wang 2015, Zettel and Sorger 2010, Zhou 2001, Zhou and Chen 1999). Jaitrong and Yamane (2011) established the current species-group classification and provided keys that make identifications in this large genus feasible. Shattuck (2008) revised the Australian species. In contrast to the Asian fauna, the taxonomy of African species has been largely neglected and never received a comprehensive treatment. Because of the above mentioned ‘dual taxonomy’ it is even difficult to give an estimate of the total number of species in the Afrotropical region, although Wilson (1964) estimated the number of species to be ‘at least 12’. Papers by Campione et al. (1983), Gotwald and Cunningham van Someren (1976), and Gotwald and Leroux (1980) are the only modern references discussing taxonomy of Afrotropical Aenictus. Several species of the genus reach the Palearctic region; recently Aktaç et al. (2004) and Radchenko and Alipanah (2004) discussed the West Palearctic species and Sharaf et al. (2012) described an additional species from Saudi Arabia.