Occurs in sagebrush habitats, creating nests with a low crater.

The female of creightoni has the mesoscutum uniformly closely and finely punctate, without a defined median impunctate area. In this respect it agrees with the females of Myrmecocystus colei, but the mid and hind femora of colei have abundant erect hairs on all surfaces. The shape of the fourth and fifth segments of the maxillary palpus is as in yuma. The punctures of the upper half of the head are coarser and much sparser than in that species.

The larva has been described, as lugubris, by Wheeler and Wheeler (1968). The description was based on material from the type nest originally misidentified by me. (Snelling 1976)

Only known from California.

Low elevations in the mountain ranges along western fringes of Mojave and Colorado deserts.

Snelling (1976) - This species has been found in areas ranging from Juniper-sagebrush desert to coastal sagebrush. Elevation extends from about 850' to 4300'. Nest sites vary from compact clayey soil to coarse sand and are marked by a low crater. Those which are located on slopes and in heavy soil usually are not more than about three feet deep and repletes are present in the lower chambers. Nests situated in the deep sand of stream beds may exceed depths of four feet.

Foraging by this species is both matinal and crepuscular. Workers emerge shortly before sunrise and continue to be active until the surface temperature reaches about 75-80°F. In the afternoon, activity is resumed about 30-45 minutes prior to sunset, sometimes as much as 90 minutes before sunset if the soil surface is cool enough. Aphids on low vegetation are solicited for honeydew and nectar is gathered directly from plants. Large quantities of arthropod fragments are brought back to the nest.

Mating flights are known to take place in early spring after a light rain. The time of day at which the flight occurs is not known. 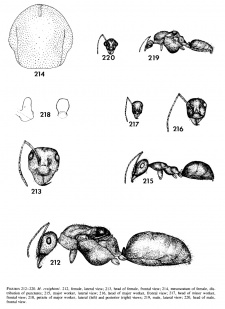 Petiole: Erect, in profile about twice higher than thick, not at all cuneate, summit rounded; crest flat in frontal view, not, or barely, impressed in middle; in dorsal view about twice as wide as thick. 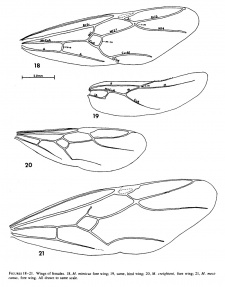 Petiole: In profile, compressed, about twice as high as thick at level of spiracle, crest thin; in frontal view, deeply notched; from above about 3.5 X wider than thick.

Vestiture: Cephalic pubescence yellowish, as long or longer than an ocellar diameter, much of it reclinate rather than appressed; scattered, not obscuring surface except on malar area above mandibular insertions. Thoracic and gastric pubescence white, appressed to reclinate; long, not concealing surface, but quite dense on gaster. 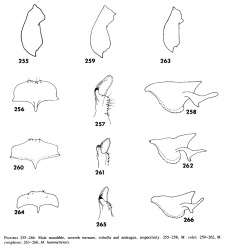 Petiole: Scale in profile higher than long, evenly thick from base to near summit where it is narrowly rounded to slightly angulate; crest, seen from front, angulate at sides, broadly and rather deeply emarginate; in dorsal view, about 2.25 x wider than long.

It is my pleasure to dedicate this species to Professor W. S. Creighton for his outstanding contributions to the understanding of United States ants, with my thanks for his generosity and enthusiastic encouragement during this study.