Workers have been found foraging during the day and their nests can be topped by large (up to 25 cm in diameter) crater mounds.

Snelling (1976): This species most closely resembles such species as Myrmecocystus kennedyi, Myrmecocystus kathjuli and Myrmecocystus wheeleri. From all of these, the worker is separable by the exceptionally long, slender, flexuous pronotal hairs. Larger workers commonly possess abundant appressed pubescence on the third tergum, while smaller workers do not, but this is not consistent. The vertex, particularly between the eye and the ocelli is polished and impunctate in Myrmecocystus nequazcatl. In the other species of this group it is mostly lightly shagreened and with distinct punctures, especially in kennedyi.

In the female, the very sparsely punctate vertex will distinguish that caste from those of the other species. The parapsis is shiny and sparsely punctate, except near the parapsidal line, as in kennedyi. The closely micropunctate first tergum will further separate this caste from the female of kathjuli; the much longer mesoscutal hairs will distinguish it from kennedyi and the black gaster will separate it from wheeleri.

The polished, impunctate gastric terga will readily separate the male from those of kathjuli and wheeleri. From the latter it is further distinguished by the ventrally convex aedeagus which has minute teeth. The minute aedeagal teeth will also serve to distinguish nequazcatl from kathjuli. The much longer erect mesoscutal hairs will further separate nequazcatl from kennedyi.

Mexico. Known only from the State of Sonora, Mexico, chiefly from the coast of the Gulf of California, but inland to Hermosillo.

Snelling (1976) - Workers were found foraging at mid-day at Hermosillo. Here, nests were in coarse-grain sandy clay and tumuli up to 25 cm in diameter were composed of coarse sand particles. At Puerto Libertad Creighton found nests situated in deep sand. His notes indicate that the ants construct "... a beautiful crater with steep sides and a diameter of about one foot when full-sized." His notes also indicate that he took a "colytid" (colydiid?) beetle from one nest. This beetle has not been located, but may have been a tenebrionid of the genus Araeoschizus.

Alates of both sexes were found on Feb. 5 near Desemboque de los Seris. It may be assumed that the mating flight occurs following spring rains. In all probability there are mating flights in the autumn, coinciding with the rains in October or November. 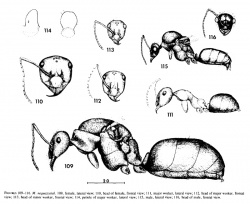 Petiole: Node, in profile, with anterior and posterior face parallel below, anterior face sloping back in upper half to broadly rounded summit; in frontal view, crest flat or gently convex, without median notch.

Vestiture: Pubescence sparse on head, abundant on thorax and first two or three terga. Cephalic hairs abundant on frons and occiput, slender, flexuous on latter, some occipital hairs about equal to EL; malar area with one or two hairs near mandibular base. Promesonotum with numerous long, slender, flexuous hairs, some about as long as MOD; base and side of propodeum with shorter flexuous hairs. Side and crest of petiole with flexuous hairs about equal to those of propodeum. Terga with numerous long hairs, longest on disc of second segment more than 0.5 x MOD; longer on apical segments and on sterna. Scape, femora and tibiae with abundant, short, suberect to erect hairs.

Petiole: In profile compressed-cuneate; crest sharp; distinctly notched; from above about 2.5 times wider than long.

Vestiture: Erect hairs present on all parts of face, least abundant on malar area, with fewer than eight on each side between eye and mandible (excluding exceptionally long hairs from gular area which may be visible), and in area between eye and ocelli; occipital hairs variable in length, but with several which are longer than EL; hairs on frons and clypeus equally variable, but shorter, the longest about equal to MOD. Erect thoracic hairs moderately abundant, some on mesoscutum and many on pleura at least as long as EL; propodeal, petiolar and gastric hairs as described for wheeleri. Fore femur with sparse short, fine erect hairs on inner face. All tibiae with numerous suberect hairs which are about as long as minimum thickness of hind tibia. Scape with abundant short erect hair on outer and lower faces. Fore and hind wing without marginal fringe.

Pubescence much as described for wheeleri, dense on first four terga.

Nequazcatl, the Aztec (Nahuatl) name for the honey ants.